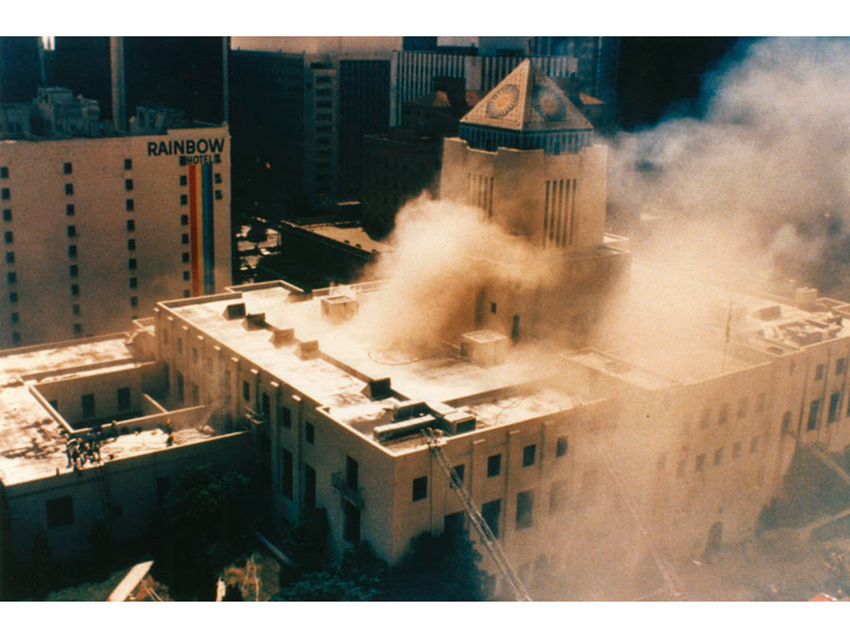 This old floor plan details a piece of history that was lost thirty years ago this Friday in the 1986 Central Library fire. A most bitter day in the cultural history of the City of Angels, this terrible anniversary should serve as a reminder of our great library’s precious collective memory and of the staff who suffered when it burned and stayed to see it rise again.

An anachronistic but deeply wonderful citadel of culture, old Central had practically outgrown itself by 1986. Created in 1926 by well-intentioned architect Bertram Goodhue, the remarkable building was far from the ideal library setup. Over the years the collections overflowed. By the 1980s, books and serials had doubled the holdings of a library that, though grand, was crunched for space.

Library administration had struggled for years to get the city to recognize the shortcomings of the structure, and by 1983 they had established a plan for expansion and renovation. While the library footprint seen here shows the two public floors, there were also six levels of musty, aromatic internal stacks that formed a sort of honeycomb—a space that would function as a chimney when the fire started on the second floor.

Around 10:52 a.m. on Tuesday, April 29, the Los Angeles Fire Department received an alarm from a smoke detector at Central, and trucks arrived on the scene within five minutes. At first it seemed the fire was not a great threat. Smoke was observed from above, though, and a major blaze was soon discovered on the fifth tier in the fiction stacks. Soon, 60 firefighting companies and 350 firefighters were battling an out-of-control conflagration that ate great swaths of books and magazines as it swept west in the old building.

Despite the firefighters’ incredible heroism, the fire burned on through the magazine pool, the map room, the social science stacks, the science department (with one the greatest cookbook collections in America), and the patents room. The intense heat—up to 2,000 degrees Fahrenheit— required that firefighters be replaced every 15 minutes or risk passing out in the terrible path of flames that stretched 300 feet along the second floor. Pools of water on the ground actually boiled in the high temperatures. The LAFD battled on, risking lives to save library resources. After seven hours and 38 minutes, they finally put the blaze out. The LAFD arson squad determined that the fire was intentionally set, but was never able to connect physical evidence to a suspect. To this day the crime has gone unpunished.

In the wake of the catastrophe, 400,000 books, one third of the great periodicals collection, and many historic maps, art prints, photographs and microforms were left destroyed—either burned in the fire, or soaked by the water used to extinguish the blaze. As the sun set on that terrible day, staff showed up to look over the devastation. By morning they were joined by volunteers from all over the city. For two weeks they worked, boxing up wet books and removing those unfit to continue service. The library-loving folks of L.A. came through when they were needed, and at the end of their effort, thousands of books and parts of the great collection were saved.

After the boost of two weeks of volunteers, dedicated library staff soldiered on for almost three miserable years to keep the light of library learning glowing in L.A. After 30 years the city has seen fit to recognize the volunteers, the firefighters, and even the politicians who got their photos taken in the aftermath—but they have ignored the very people who made Central Library rise up out of the ashes. Maybe someday the city will remember the library staff, but apparently that day has yet to come.