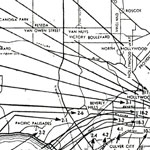 It is hard for the past two generations to imagine the fear and uncertainty in Los Angeles on June 1, 1942, the morning this map appeared in the Los Angeles Examiner. Just six months into America’s involvement in World War II, the populace was being instructed where to find refuge and medical care if the city were under attack. Casualty stations are listed and pointed out on the map as a “just in case precaution,” but a “blue alert” had been announced the day before, and barrage balloons had been raised up and down the Pacific Coast to discourage low level bombers from focusing on targets in the region including our precious oil fields and very important harbor. Civil Defense volunteers and law enforcement officials were being issued gas masks while the public learned about blackouts and aircraft identification. There were food riots in Paris and news of the horrors of Nazi gas chambers was reaching the local citizens. On this very day the Manhattan Project (a development project that produced the first atomic bombs) began, but folks on the streets of Los Angeles saw only this map and felt their blood pressure rise imagining an invasion was possible. Nerves had already been jangled by the false alarm known as  “the Battle of Los Angeles,” which took place in the wee hours of February 24, when anti-aircraft guns sent 1,400 shells into the sky over the city.

To make matters worse, Japanese forces occupied the islands of Attu and Kiska in the Aleutian Islands two days later, marking the first time an “enemy force” had set foot on an American territory since the War of 1812. So locals took note of their nearest casualty station and this map was taped on walls around town while places like City Hall, U.C.L.A., Union Station, the Elks Hall, St. Paul’s Cathedral, the Brentwood Golf Club, Bless Sacrament School, and dozens of junior high schools, high schools and junior colleges readied for casualties. Three days later on June 4 the U.S. fought and won the Battle of Midway, which proved to be the most important naval battle of the war, turning the tide. Three more years of misery and home front worry remained.