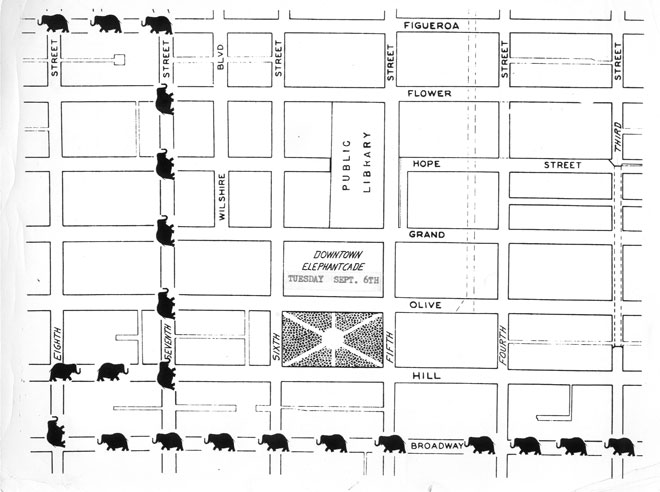 This most unusual map, published in the local papers on September 5, 1960,  trumpets one of the oddest events in downtown Los Angeles history: the “elephantcade” right down Broadway and beyond. In the pre-PETA protest days the Ringling Brothers and Barnum and Bailey Circus was peaking. The show was in its 90th year in 1960, and this publicity stunt involved 20 Indian elephants parading through downtown from their railroad cars to the new Sports Arena, which doubles as a big top for the event. The “greatest show on earth” was in town for 12 days with two shows per day, carrying a top price of $4 and 2,000 seats per show for a buck. Out in front of the Arena hawkers sold balloons, whirligigs, small turtles, and live lizards to children who wore them like broaches attached by tiny leashes on their shirts and dresses.

The urban elephant trek began at noon in 94-degree heat; the animals were marched west on 3rd to Broadway, south to 8th Street, west to Hill, north to 7th Street, west to Figueroa, and south to the glittering Sports Arena at Figueroa and Santa Barbara (which one day would become Martin Luther King Boulevard). The spectacle took some by surprise and office workers “hung out of windows,” gawking at the pachyderms who lumbered down the streets with a pack of kids trailing behind taking in the sights and smells of the circus. As if 40 tons of Elephas Maximus walking single file down Broadway wasn’t exotic enough, the circus provided an extra helping in the form of a llama and a zebra to close out the procession.