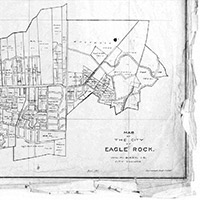 Before Eagle Rock turned into the hipster haven it is today, it had a rather rich history dating back to the Tongva Indian tribe, who lived peacefully in the canyons surrounding the famed Eagle Rock and drank from a deep well in the vicinity of today’s Yosemite Playground. In colonial days the land was part of the San Rafael Rancho given to Jose Maria de Verdugo by Spanish governor Pedro Fages and was eventually subdivided and sold off after statehood (31 parcels of land were divvied up, and the Eagle Rock portion was purchased by Benjamin Dreyfus).

For years the land was used for truck farming and orchard planting with the hills and dales connected by a wagon road to Glendale. The valley was described as “a picturesque bit of country scenery tucked away by itself far from the main roads of travel.” To the rest of the city the place was mostly known for its marvelous strawberries (Gates) and winter vegetables. Then came Mr. Huntington’s streetcar connections to Los Angeles in 1906, and the farmland became real estate.

Eagle Rock was described in local newspapers as “high dry health” and “a pretty little suburb” where one might sink down roots in bucolic bliss with the hustle and bustle of L.A. just a handful of miles away. This tract map was created at the time of incorporation where the 600 residents of the city were developing a residential community with unlimited potential.

Long before the existence of lines outside Casa Bianca Pizza or the Oinkster, local farmers bemoaned early “gentrification” of the valley. Even though many of the names changed over the years, the big streets are on this cadastral map: Colorado and the picturesque Hill Drive are in place along with Central (which later became Eagle Rock Boulevard). Linden and Fairmont became Maywood, Paloma was to become Shearin, Castle was to become Caspar and Sycamore turned into Yosemite.

By 1914 they had lured Occidental College to set up one of the nicest campuses in the West on a hill called “Mt. Fiji,” and when the population zoomed toward 5,000 by 1920, they petitioned the big city to the south and became Los Angeles annexation number 46.