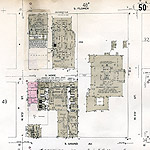 These few blocks of downtown Los Angeles, as seen in the mid-1950s, are rather symbolic of the changes that took place on the edges of downtown during the formative years of the city. In what used to be a 19th 4century Edenic tract of graceful slopes and orchards, multi-story buildings rose up and the hills were planed down for a new kind of hybrid place, with commerce and culture standing together.

A religious institution and a fine hotel and theater shared the neighborhood with an exclusive men’s club and a grand public library in the 1920s, surviving the depression and war years and transitioning into the boom of the 1950s. Then, as post-war money flowed outward into the suburbs, downtown hit the doldrums despite efforts to revitalize the old city center. With the freeways slicing the area into drive-by neighborhoods, these few blocks held together for reasons that changed little through time: they were destinations that people sought out as opposed to establishments dependent on customers walking in, and so the library, the California Club, the Biltmore and the church survived while retailers came and went. In fact, each building on the map still exists today in one form or another, though the quality of their surrounding communities has seesawed drastically over the past several decades.

Many of these large structures were completed in a mini-building boom during the 1920s, including the Pacific Mutual Building in 1922, the Biltmore Hotel and cozy Biltmore Theater in 1923, the Central Library in 1926 and the California Club in 1930. The Bible Institute of Los Angeles (with its iconic “Jesus Saves” sign) was from an earlier generation, founded in 1908 by a trio of Christian gentlemen including Lyman Stewart, the President of Union Oil. The Church of the Open Door moved into the 4,000-seat auditorium in 1915 and preached the Word until 1985.

Rendering unto Caesar what is Caesar’s, the spanking new Superior Oil building was completed in 1956 and is now the scene of great hipness: the famed Standard Hotel stands in its place.These few blocks have born witness to a variety of amazing social events, including the opening ceremonies of the Biltmore emceed by Will Rogers, the short but spectacular reign of televangelist Gene Scott at the Church of the Open Door, Katherine Hepburn in As You Like It at The Biltmore Theater, a day-long gun battle on 5th street for the film Heat, and the ironic side-by-side of the ultra-exclusive California Club and the “People’s University” of the Los Angeles Public Library.