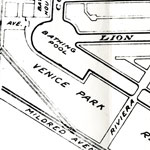 Southern California has always been a place for big dreams and outrageous dreamers, but few can match Abbot Kinney and the creation of Venice, California back in 1905. No man was as audacious and no place as impressively conceived as this playground on the mostly barren sand dunes near the old city of Ocean Park. Even Walt Disney’s Magic Kingdom, built some 50 years later, did not require 70,000 tons of flint rock—the amount Kinney put down just to create a breakwater so construction could begin. Then, with truly Herculean efforts, the resort of Venice was built in a fanciful design featuring canals and streets bearing romantic sounding titles along with amenities like a miniature railway, a pleasure pier, a fine, modern hotel,  a 2,500-seat auditorium and even a lagoon for swimming. During development, there were plenty of construction puzzles to solve and an unreasonable deadline to meet, but the place got built despite great obstacles. To add to the drama, a storm almost flattened the entire project on March 12, 1905. The place finally opened to rave reviews on July 4 of that year. Sunset magazine described it as “what promises to be the most remarkable city in the world” and “the most romantic city of the old world on a basis of progressive commercial integrity.”

As for the complexity of the task of turning Venice into a cultural oasis in the wilds of Southern California—and ultimately, the impossibility of that dream—a large and scholarly book exists on the topic. Still, the optimism of Kinney’s plan is still alive in the map above, which was created for an article published just a few months after the opening of Venice’s magical 120 acres. The canals, which were central to the recreation of Italy’s magnificent Venice, feature largely in this draft. Dug with steam shovels, teams of horses, and lots of sweating men, the canals were designed to create a residential and commercial space unlike any in the country. The well-traveled and cultured Kinney named the waterways for uptopian places, imagining the arts would bloom on the shores of the Pacific. Sadly, those who flocked to Venice seemed more interested in carnival attractions than Chautauqua. The advent of the automobile and a lack of area parking drove local merchants to press for the canals “to be turned into thoroughfares to attract new capital.” Eighty-five-thousand cubic yards of fill were dumped into the once-romantic waterways where gondolas had drifted and singers had once serenaded champagne-sipping nouveau-Venetians with Italian songs.

By February of 1930, Coral, Aldebaran, Cabrillo, Altair, Lion, Venus, and the Grand Canal had been transformed into streets. Only three—Cabrillo, Altair, and Grand—kept their names given to them as canals, wan tributes to the old Kinney dream.

Above: The Plan of Venice, Sunset Magazine, November 1905