Home L.A. Home CityDig: What Was Disneyland Like in 1968? 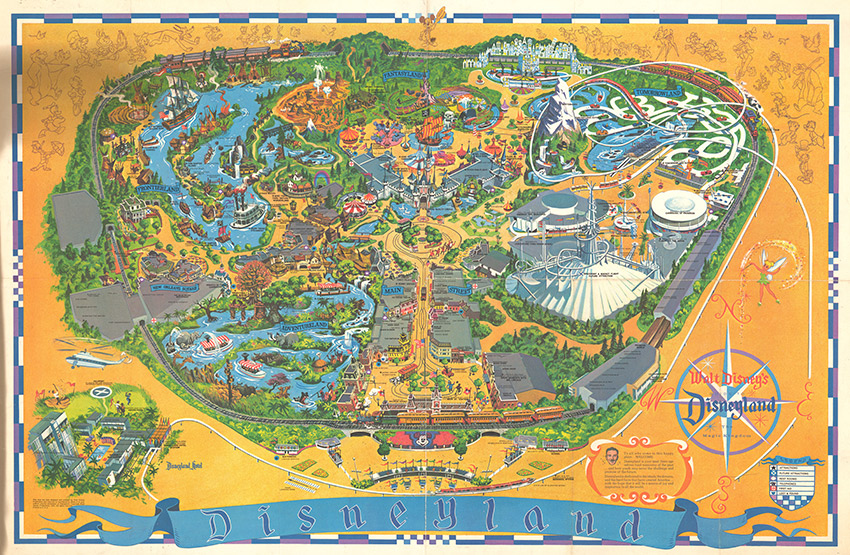 While Disneyland is technically and geographically not even in Los Angeles County, it has been a big part of the L.A. lifestyle dating back to the 1950s. This fine pictorial map created by Sam McKim in 1968 (click here to see it larger) shows the Magic Kingdom during a year when the park as most vintage Angelenos know it was in place and making indelible memories.

Baby Boomers can mark stages of their lives by visits to Disneyland, and some of us were even there when it opened on July 18, 1955. The park was originally the realization of a little dream Walt Disney had about putting together an outdoor amusement park for his employees on a nine-acre spread next to his Burbank Studios. World War II interrupted such levity, but afterward Walt got serious about finding land to build a major park, eventually finding a 160-acre citrus grove in Anaheim where he would realize his “Disneylandia.”

Such a major undertaking was not an easy sell to investors, but Disney had just created a very popular television show on ABC that assisted in bankrolling the huge construction project. They broke ground on July 21, 1954, and first had to clear the ground of old growth orchards and move sixteen houses out of the way. The rather premature press opening on July 17, 1955 was pretty disastrous, with no functioning water fountains, asphalt that was still unsettled, a gas leak, and several areas closed for repairs. Still, the public opening was glorious, and by the end of the year kids all over Southern California knew the names of the five principal areas of Disneyland (Main street, Adventureland, Fantasyland, Tomorrowland and Frontierland) along with the corresponding attraction letters in the ticket books that went from A (not that exciting) to E (great stuff). At the time of this map, most folks went right for the E’s on rides like the Matterhorn, the Jungle Cruise, Pirates of the Caribbean, the Haunted Mansion or Autopia and then moved on to sweeter, gentler things like Small World. Other crazy souls somehow had fun on the teacups.

This map captures memories of a bygone time when the Skyway, a gondola attraction, crisscrossed over the park and a graceful monorail toured the perimeter, both whetting amusement appetites as they went. There are some comically dated attractions: the now politically incorrect “unfriendly Indians” who burned settlers cabins, a tobacco shop on Main Street where one could stock up on cigs, and the Kodak store, where you could purchase plenty of film. Dear old friends also appear on this map: the Mark Twain stern-wheeler, live pack mules, Monsanto’s Adventure Through Innerspace (keep in mind this was before GMOs), the General Electric Carrousel of Progress, America the Beautiful, and the quaint Carnation Ice Cream Parlor, where hungry kids could get a cheeseburger with a side of cottage cheese instead of French fries (it was Carnation, after all).

Just a year after the Summer of Love, the map lays out a Disneyland that was pure fun and fantasy away from the troubles of Vietnam and student protests. Then again, in 1970, wiseacre Yippies commandeered Fort Wilderness on Tom Sawyer’s Island and hoisted the Vietcong flag above the battlements (much to the chagrin of officials at the tightly-run Disneyland). Propriety returned quickly, and millions of visitors (9.2 million at the time of this map) would continue past the Mickey Mouse topiary at the park’s front gate on their way into The Happiest Place On Earth for years to come.