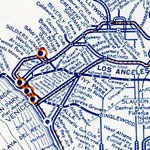 This familiar map by D.W. Pontius, traffic manager of the Pacific Electric streetcar system, has appeared many times in many sources, but the version shown here was passed out to tourists across the city who might be ready to “travel 101 miles for one hundred pennies.” Although the map was given away at the Ostrich Farm in South Pasadena, a stop on the “Old Mission Trolley Trip,” it also publicizes the less popular “Triangle Trolley Trip,” and the mega-popular “Balloon Route Trolley Trip,” an excursion that was de rigueur for visitors to Los Angeles in the early 20th century.

The Balloon Trolley Trip route (supposedly in the shape of a balloon) was widely promoted by the tireless C.M. Pierce; its ephemera boasted, “Southern California is unequalled and unrivalled in all lands, as its admirers everywhere bear witness…Los Angeles, the metropolis of this Southern Empire is the Mecca to which all tourists go…”

At its peak the balloon excursion filled an astounding 18 carloads in one day. When the Pacific Electric merger took place in 1911, Pierce left the organization, but the Balloon Route continued to be a winner. Tours started at 9:40 a.m. daily at 316 W. Fourth Street and then heading through historic downtown out to the marvelous gardens and studio of artist Paul DeLongpre in Hollywood and on to the Old Soldiers Home in West Los Angeles (still treating soldiers of the Union Army), the Long Wharf in Santa Monica, the Camera Obscura nearby, the Playa Del Rey Pavilion for a fish dinner, enchanting Moonstone Beach in Redondo, and Venice to see the canals before passing through Palms while rolling back home by 5 pm. D.W. “Dave” Pontius eventually became president of the Pacific Electric Railroad Company but he is possibly best known as the skilled cartographer who created a map that still hangs on walls across Los Angeles.

Above: Map of the Pacific Electric Trolley Trips, D.W. Pontius, 1912