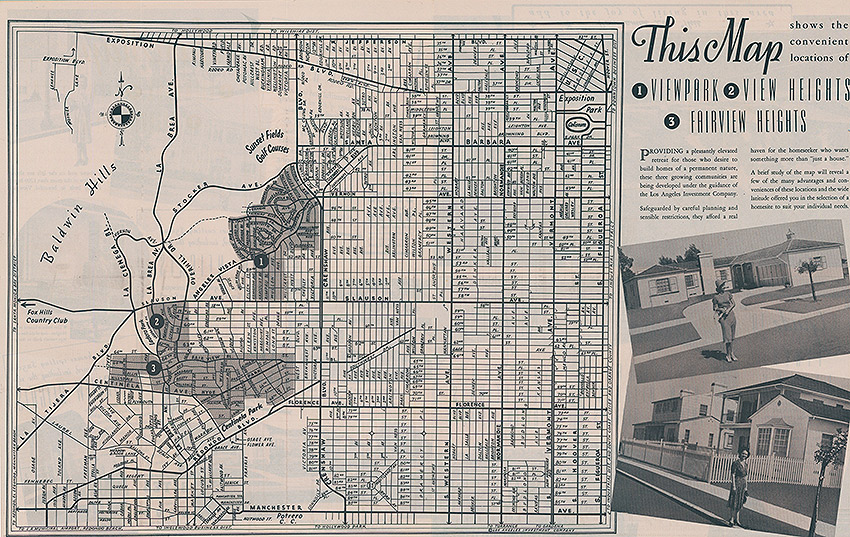 It has been said so many times that the neighborhood of View Park is the “best kept secret” in Los Angeles, so I won’t say it again. Instead, I’ll show a map (click here to see it larger).

This little brochure come-on shows the community and its slice of the American dream circa 1936. The Los Angeles Investment Company had purchased the land from the estate of Clara Baldwin Stocker and set out to create a “pleasantly elevated” oasis from city strife “overlooking the city-like observatories.” The open acreage atop the Baldwin hills had been available for sale as far back as 1927, but it was not until the 1932 Olympic Village was placed there that folks saw what a prime piece of real estate the land actually was. Just 10 miles southeast of downtown and smack between USC and the fledgling UCLA, View Park offered large lots where buyers could choose their own architects (such as the great Paul Williams) and create their own dream homes. Some 2,700 domiciles, many “artistic stucco and colonial homes,” were built up on the hill where those interested in finer living might find a forever home. At the time of this map’s creation, African Americans were forbidden from buying lots in View Park and across the city due to racial covenants created by developers and land owners (who institutionalized their land settlement segregation). Realtors who tried to integrate a neighborhood might have even had their license revoked by those in power downtown. In 1948, the U.S. Supreme Court put an end to such exclusion, but redlining hardly ended. It was not until the 1960s, when the Civil Rights Movement emboldened African Americans in Los Angeles to break through such restrictions, that the first few black families bought homes in View Park.

Once the restrictions fell away, more successful African Americans moved into the now rapidly integrated area while wary white residents, in what is often called “white flight,” moved out to suburbs and Orange County. Black professionals found View Park an ideal spot to raise a family or conduct their business considering the beautiful streets and proximity to all things Los Angeles. So many doctors bought homes in the area in the early years that one set of streets became known as “pill hill.” By 1970, beautiful View Park was eight-to-one black, and at present it is considered one of the finest African American neighborhoods in the country. Ray Charles, the Reverend James Cleveland, Nancy Wilson, and any number of Los Angeles sports stars have called View Park home. Still referred to as “a secret hidden in plain view,” the View Park seen on this map continues to be an Eden on the scenic south slopes of the Baldwin hills.

Tucked Away Behind a Macy’s Bed Display, a Lesson in Civil Rights History