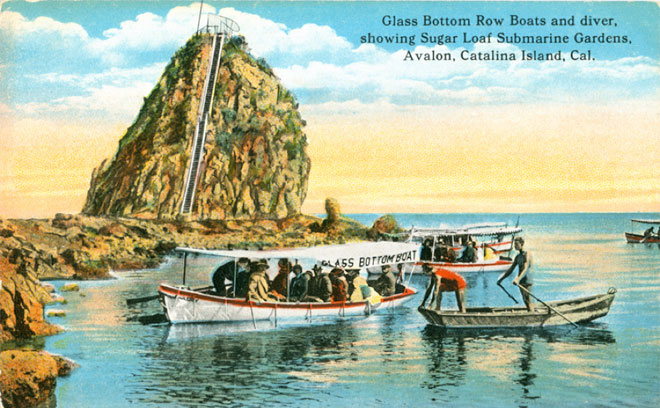 In 1929, dynamite forever changed the look of Catalina’s Avalon Bay.

Long one of Catalina’s most prominent landmarks, Sugar Loaf Rock was a volcanic monolith rising some 50 feet above the harbor where Avalon’s iconic Casino building stands today. Early 20th-century guidebooks described the Sugar Loaf as Avalon’s “sentinel rock,” and picture postcards—like the one above from the Catalina Island Museum’s collections—made the promontory known across the county. Each Fourth of July, Avalon’s fireworks spectacular transformed the Sugar Loaf into an erupting Mount Vesuvius, its summit ablaze and its flanks striped in red, white, and blue. When it went dormant, a rickety steel ladder beckoned adventurous tourists to the top, where commanding views of the resort town—and an iron safety rail—awaited them.

In 1920, the Sugar Loaf Casino—not a gambling hall, but a dance pavilion—opened next to the lithic landmark. Views from the windows of the octagonal Sugar Loaf Casino framed the rock against the azure sea.

But, like countless other Los Angeles-area landmarks, the Sugar Loaf would not survive the march of progress. With tourism booming, island owner William Wrigley commissioned a newer, larger casino in 1928. Plans originally envisioned the Art Deco structure standing side-by-side with the old rock, but by March 1929 Wrigley had changed his mind, presumably deciding that the rock would obstruct views of the open ocean. Workers called in the dynamite, and one landmark took the place of another.