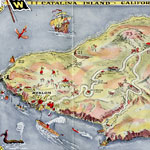 This little gem is a perfect example of the melding of graphic arts and cartography that was done during the golden age of pictorial mapping to draw tourists to Catalina. The map is just part of a brochure created during William Wrigley’s drive to create a world-class resort for Los Angelenos. Once Wrigley took over the island in 1919 he did his best to lure mainland folk across the 22 miles of ocean to beautiful Avalon and the rugged climes of Santa Catalina, where visitors could swim, snorkel, fish, hike, camp, ride horses, and even golf.  The map covers some island history including Tongva Indian village sites, Smugglers Cove (where real life smugglers once hid out from the law), Orizaba (the highest peak at over 2,000 feet), a blue whale (the animal was vigorously sought), and Isthmus Cove, where the Great Catalina Channel swim was staged in January of 1927. 102 swimmers started but only one succeeded in reaching the mainland for a prize of $25,000. Visible also are flying fish, one of the great white steamships that transported tourists across the channel, and a glass bottom boat that delighted folks who gazed into the briny deep while staying safe and warm on board the ship. Wrigley also made sure there was a fine hotel in Avalon, along with the Casino for dancing. So popular was Catalina for dances, the original Casino was razed just two years later and the landmark Art Deco Catalina Casino was built at the whopping cost of $2 million bucks.