Home Uncategorized CityDig: Before There Was Little Osaka, There Was the Sawtelle Soldiers’ Home 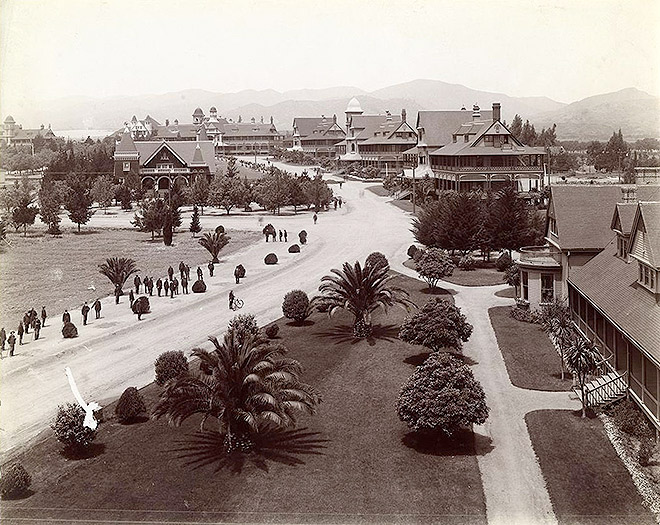 Officially it was the Pacific Branch of the National Home for Disabled Volunteer Soldiers. Locals knew it simply as the Sawtelle Soldiers’ Home. Either way, the complex, part of a national chain of homes for Union veterans of the Civil War, hardly provided the domestic atmosphere its name suggested. Residents slept in barracks, ate in a mess hall, and dressed in blue army uniforms. Army rules and discipline governed their conduct. Residents even needed permission for extended leave from their “Home.”

The grand Victorian structures of the Soldiers’ Home—barracks, a hospital, a chapel—rose from an alluvial fan at the mouth of Sepulveda Canyon in 1887. The 300 acres of land along with $100,000 in cash and land for a reservoir up-canyon were a gift from Santa Monica’s principal developers, U.S. Senator John P. Jones and Arcadia Bandini de Stearns Baker. Jones and Baker hoped the facility would spur development of the open countryside around the site. Their wish was fulfilled as two towns—Sawtelle and West Gate—soon rose on the outskirts of the Soldiers’ Home.

Sawtelle survives today as a Japanese American enclave, while West Gate, so named for its location outside the Soldiers’ Home’s western walls, has become tony Brentwood. The wrecking ball, meanwhile, has claimed most of the old Victorian buildings of the Soldiers’ Home, but the complex still serves one of its original purposes today as the West Los Angeles VA Healthcare Center.