Home Uncategorized CityDig: Before the Dodgers, L.A. Had The Hollywood Stars—and Gilmore Field 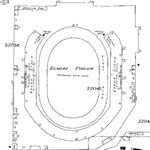 To celebrate the hopeful beginning of baseball season once again, it seems worthwhile to take a look back at some of the sport’s history in Los Angeles. Angelenos have always been avid participants in the national past-time, going back to the first games played in the 19th century on the field at St. Vincent’s in downtown to professional competition at Chutes/Washington Park where the Coast League played as early as 1902. Wrigley Field, where the Los Angeles Angels and the Hollywood Stars played for roughly ten years, was built at 42nd and Avalon In 1925. Eventually Earl Gilmore, the heir to the Gilmore Oil Company, decided to give the Stars their own ballpark.

On this sheet we can see several of the landmarks of the area, including Gilmore Stadium, which opened in 1934 and hosted a variety of activities, including professional football, midget auto racing, boxing, rodeos, dog shows and even some experiments at baseball in the odd shaped (for baseball) field. A true baseball stadium, Gilmore Field, opened May 2, 1939 and became very popular with celebrities who were offered stock in the enterprise, including part owners Bing Crosby and Gene Autry. Gilmore Field felt amazingly intimate despite plenty of room in the outfield where only sluggers could reach the 385 power alleys and 407 feet to the board fence in center field. For decades the rivalry between the Hollywood Stars and Los Angeles Angels was one of the hottest on the West Coast; a fight on the field once lasted over an hour and had to be broken up by the LAPD. Gilmore Field continued to thrive until the Major League came to Los Angeles and the Dodgers agreed to play here in 1958. From then on, Gilmore Field’s days were numbered. By then the Stars had lost their luster and moved to Spokane, becoming the Indians without any stellar drawing power.