Home Uncategorized CityDig: Before the 405 Was Paved 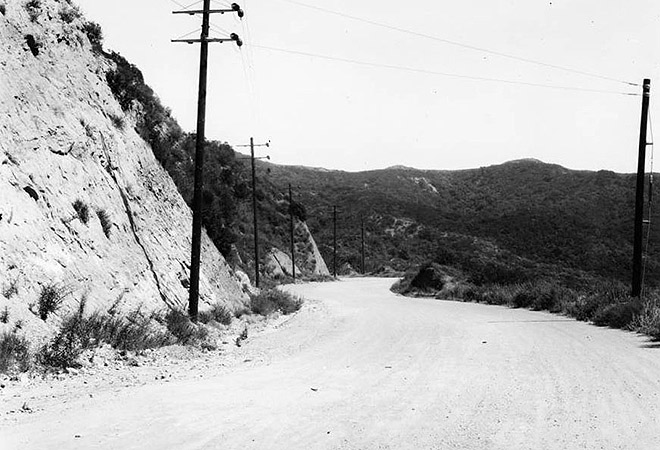 Today a river of concrete passes through Sepulveda Canyon, one of the three main portals between the San Fernando Valley and the Los Angeles Basin. But in 1934 that mighty river—the 405 freeway—was only a modest stream, a winding, unpaved road that snaked through the Santa Monica Mountains.

For centuries the region’s native Tongva people had hiked up a faint footpath through Sepulveda Canyon, and in 1769 the soldiers and clergy of Spain’s Portola expedition followed the ancient trade route on their way to Monterey. Trail became road in 1875, when the two wheat barons of the San Fernando Valley, Isaac Lankershim and Isaac Newton Van Nuys, widened the footpath to allow for the passage of sturdy wagons laden with grain and bound for ships docked at the Santa Monica Pier. But when the Southern Pacific soon lowered its freight rates, the wheat ranchers instead sent their harvest by train to San Pedro. The new, neglected road eroded into the hillsides.

Eventually, booming development in the San Fernando Valley during the 1920s persuaded the city and county to rebuild the road for automobiles. Traffic was overwhelming the two established routes between the Valley and the Basin, Cahuenga Pass and San Fernando Road, both of which were out of the way for residents of faraway Van Nuys and Owensmouth. New Sepulveda Boulevard—a fifty-mile highway stretching between San Fernando and Long Beach—would provide the Valley with a more direct link to the harbor at San Pedro Bay.

Construction lasted several years and culminated with the opening of a 650-foot tunnel beneath the summit at Mulholland Drive, an event the city celebrated with a grand Spanish-style fiesta. But by the time traffic started flowing in September 1930, the new Sepulveda Canyon Road was already inadequate. Just five years later the state spent $275,000 to pave it, and in the early 1960s traffic engineers gouged a channel 1,800 feet wide and 260 feet deep through the canyon to allow passage of the San Diego Freeway. Widening of this ancient trail continues to this day.

Above: Sepulveda Boulevard near the Sepulveda Pass on February 17, 1934. Courtesy of the USC Libraries – California Historical Society Collection.