Home L.A. History CityDig: Angels (and Tigers) in the Outfield 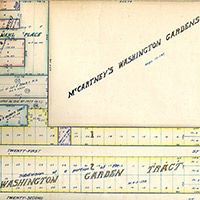 While it may sound impossible (and sad), the history of baseball in Los Angeles goes back even further than the voice of Vin Scully. America’s National Pastime was played here on the dusty streets of the Plaza as far back as the 1860s, and organized ball existed as early as 1880 when Orange beat Acme 21-17 at the old Agricultural Park over by USC. Over the course of our city’s history, there have been scores of diamonds where the horsehide was batted around and at least a dozen of those where professionals played the game.

The ballpark shown on these maps is Washington Gardens, which went by several other names but offered recreation and amusement to Angelenos going back to 1878. This L.A. landmark once contained a theater, a beer garden, an ostrich farm, an aviary, a miniature railway, a full-sized zoo, a bandstand, an occasional circus and even hot-air balloon rides. In its incarnation as Chutes Park (which opened in 1900), it contained a fantastic water slide that drew folks downtown from all over the southland. Conveniently located on the streetcar lines, attractions like Chutes were called trolley parks and gave the common folk a place to have fun without traveling out of their city.

Baseball was of course a big draw (and a big part of the fun), and directly after Chutes opened, the Pacific Coast League began play on the dirt-infield diamond in the form of the Los Angeles Looloos (which quickly changed to the Los Angeles Angels). In 1911, Chutes Baseball Park was knocked down and Washington Park was erected, this time with a genuine grass infield and vast dimensions all around, especially to center field. In exhibitions during the off-season of 1919, even the great Babe Ruth failed to clear the center field fences, some 460 feet, at Washington Park but did blast one into the bleachers in right, about 14 rows up. McCartney’s Washington Park as it is identified here seated 12,000+ and was home in 1917 to both the Angels and the Vernon Tigers, who together played around 172 games on that well-worn diamond. The Angels had won the pennant in 1916, and though World War I cut the 1918 season short, they won again in a playoff with the Tigers. 1919 saw one of the most memorable pennant races in PCL history where Vernon came out of nowhere and overtook the Angels in the final three games to win their first gonfalon.

The Angels and the Tigers continued playing at Washington Park until 1925, when the Tigers moved to San Francisco to become the Mission Reds and the Angels moved to their sparkling new Wrigley Field. Oddly enough, the Tigers/Mission Reds came back to SoCal in 1938 as the Hollywood Stars and shared Wrigley with the Angels until the Stars opened their own space, Gilmore Field, in 1939.