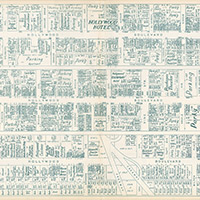 In an effort to stay in the holiday mood, we’re sharing this detail-rich sheet from a 1950s real estate atlas showing Hollywood Boulevard in its post-war glory (i.e. where the Hollywood Lane Parade brought Christmas cheer each year to Los Angeles).

Beginning in 1928, the parade was held very early in the Yuletide season and transformed Hollywood boulevard into Santa Claus Lane with bands, floats, movie stars and, of course, Santa Claus—sitting oh-so-appropriately  in the back of a convertible. Over the years the parade has waxed and waned in popularity but has featured Grand Marshals Bob Hope, Natalie Wood, William Shatner, Jimmy Stewart, Mickey Rooney, Magic Johnson and even David Hasselhoff.

Throughout the 1950s, the Hollywood Lane Parade officially kicked off the Christmas season, and folks came from all over the southland to have the rare opportunity to wear their winter coats and possibly be seen on KTLA telecasts.

The Nirenstein atlases are amazing visual time capsules of shopping areas. Each business is represented, from tiny dress shops to huge department stores. Owners of the lots were identified along with a numbering system that detailed assessed property value, square footage, and even the height of buildings.

There are three swaths of Hollywood Boulevard stretching from Wilton all the way up to La Brea, illustrating plenty of familiar names from the past and present. The soon-to-be-unveiled Hollywood freeway is seen in the lower center, where it obliterated other parts of historic Hollywood (though much remains). The great movie palaces are there: Grauman’s Chinese Theater, the Hollywood Egyptian and El Capitan along with the storied Hollywood Hotel, the landmark Roosevelt and the Hollywood Canteen.

The famed Brown Derby sits at Hollywood and Vine while other historic eateries like the Tick Tock Café, the Pig n’ Whistle, Du-Pars and the blessed C.C. Brown’s (where hot fudge was an art form) also appear.