Home Uncategorized CityDig: An E-Z Way to Get Around L.A. 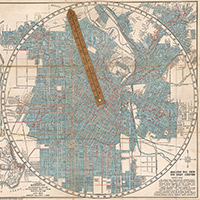 I like to consider this clever little fold-up map the first Mapquest, what with its accurate location indicator stuck in the center (which allowed early motorists to get from point A to point B with no problems—except for maybe the lack of paved roads).

1918 was a watershed year for the city of Los Angeles as it was prepping for growth, and such a map was very useful for several reasons: First, as World War I came to a close (Armistice was November 11), mass production of automobiles was in full swing, thus offering many Southern Californians the opportunity to move about the entire region in relatively inexpensive cars. The E-Z Guide made it, well, easy to find places and determine distances just by moving the “patented indicator” among some 2,000 place names that are printed on the back of the map. There are 96 numbers on the circumference that pinpoint everything from Railway Stations to prominent buildings to any one of the 13 Motion Picture houses.

Second, since Los Angeles, along with the rest of the country, was in the grip of a terrible Influenza epidemic at the time (it’s estimated that 500,000 people died of the disease that year in the United States), mass transportation was approached with trepidation. As such, private cars—and the maps used to navigate them—became more desirable than ever.

With the help of the automobile, L.A. was spreading outward, and many smaller communities were joining the big city by annexation. This map covers a surprisingly large area (from Malibu to Naples along the coast and from San Pedro all the way out to San Bernardino). In town, the E-Z guide shows life at Elysian, Eastlake, South, Griffith, Lincoln, Sycamore and Exposition Parks along with death at Calvary, Rosedale, Evergreen and the Hollywood Cemeteries. The slow slide down the slippery slope toward an automobile metropolis had begun, and the E-Z Guide pointed the way.

Bonus fact: The “German-American Trust and Savings Bank” was the original distributor of this map, but German-Americans were being interned in Los Angeles county at the time. The name was changed to “Guaranty Trust,” which must have seemed like a better sell.