Home Uncategorized CityDig: An Auto Road Map From When L.A. Was Traffic Free 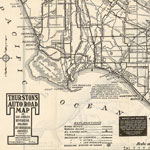 While the Auto Club had done the work of placing signs and creating the first auto road maps, there were others who wished to jump on the bandwagon. Such is the story behind this early folding “area” map of Los Angeles and three adjoining counties that describes “good roads,” “wagon roads,” “trails,” “the El Camino Real” and “gas stations or garages” with a “G.”

Los Angeles was just 17 years into the era of horseless carriages when this map was produced in 1914 (the rather brief journey of an “Erie” occurred on May 30, 1897), but the number of automobiles manufactured had increased 350% since just 1904, and there was already a 314-page Los Angeles Automobile Directory in print. The city was thrilled by Barney Oldfield’s winning the Cactus Derby road race from L.A. to Phoenix, and with the new assembly line mass-production taking place at Ford in Michigan, even the common man was going to be able to get in a car and drive. Gas was 11 cents a gallon and the speed limit in downtown was 12 mph but up to 30 mph on the open road. Traffic was still a new word in the Angeleno vocabulary. Still, there were 601 accidents in the month of November alone and enough confusion in the streets to cause a ordinance created for the Los Angeles Traffic Squad to state “DO NOT LEAVE ANIMALS UNHITCHED ON THE STREET.”

The map’s maker, Albert G. Thurston, was a “directory man” who created City Directories for places around the state, including his home city: Pasadena. Many early 20th century street maps were created to accompany directories and Thurston made his biased and basic, identifying principal roads along with the excellent Pacific Electric Streetcar system that sometimes shared lines down the middle of boulevards with cars in this Pasadena-centric landscape. The good roads are demarcated: north-south Central Avenue, Main Street, Vermont, and even Long Beach Boulevard are prominent, yet the longest street, Figueroa, is not marked. San Fernando snakes along from Glendale through the Valley all the way out to Saugus, and the east-west byways call out to motorists the names Colorado, Huntington, Whittier, Wilshire, Pico, Washington, and the very old Mission Road.