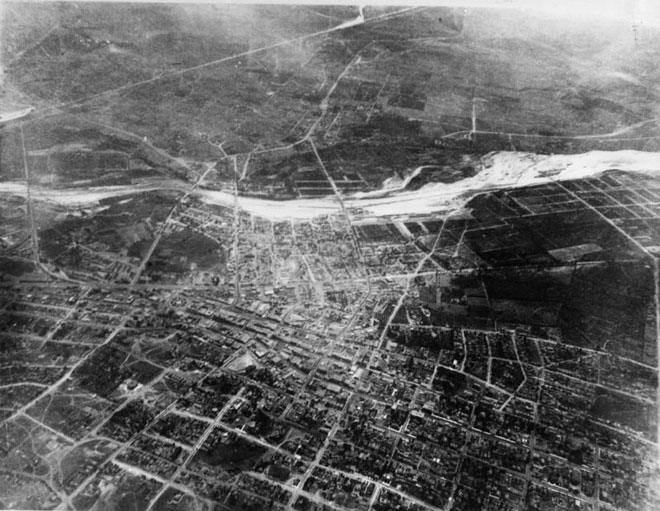 As a follow-up to last week’s post about George Watson’s 1919 aerial images of Los Angeles, this week’s post looks at what is likely the first aerial photograph of the city.

In 1887, aeronauts gave Los Angeles a new way of seeing itself. Floating 9,000 feet above the city in a hot-air balloon, photographer Edwin H. Husher tilted his camera over the basket’s edge and captured thirteen views of Los Angeles.

Husher’s voyage was part of an elaborate publicity stunt orchestrated by the San Francisco Examiner and its new owner, William Randolph Hearst. Though designed to sell advertising—and to top a similar hot-air balloon stunt by Hearst’s archrival Joseph Pulitzer—the event injected extra excitement into a booming city teeming with real-estate boosters and instant millionaires. On the afternoon of June 26, 1887, residents clambered up hills and onto rooftops for a glimpse of the air balloon, and a special excursion train brought onlookers from as far as San Bernardino. To entertain crowds gathered around the takeoff site, a team of local ballplayers hosted the San Luis Obispo nine at the Sixth-Street Baseball Park.

Unfortunately, the aircraft did not rise on schedule. As the innings wore on, the balloon’s gasbag remained half-inflated. Upon examination, its pilot, Joseph Van Tassell, discovered rocks and dirt lodged inside the air pipe. The Examiner organizers spread rumors of sabotage—perhaps by an agent of the rival San Francisco Chronicle—through the large and increasingly impatient crowd.

The balloon made its voyage a day late on June 27, rising almost two miles above downtown Los Angeles. The four-hour flight was not without incident. Disaster nearly struck when the aeronauts encountered turbulence over the Santa Monica Mountains, and when the balloon finally came to rest in the San Fernando Valley, it touched down on a cactus patch.

Nearly two months later, the Examiner published a special Southern California edition that featured Husher’s images—likely the first aerial photos of Los Angeles. For the first time, Angelenos could contemplate their city as a collection of networked, abstract forms: the unnaturally straight lines of streets, the dark polygonal shapes of pastures, the glistening sandy wash of the untamed Los Angeles River.