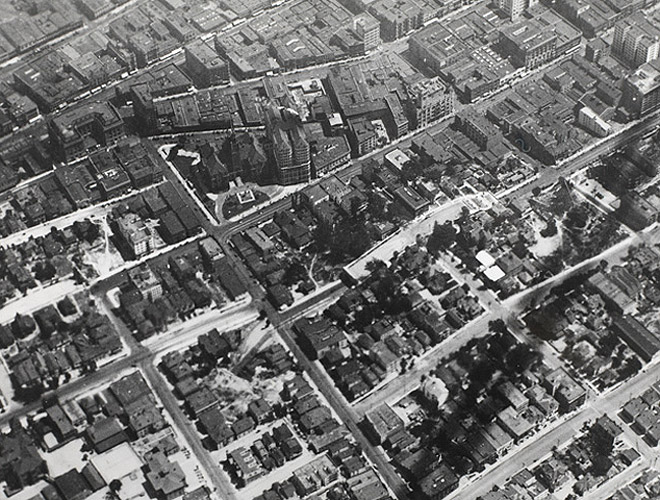 How does a bird see Los Angeles? Today Google Maps, a flight out of LAX, or even a small aerial drone provides a ready answer. But the notion of a bird’s-eye view was still a novel one in 1919, when George Watson soared over the city in a Curtiss biplane and captured more than a dozen aerial images for the Los Angeles Times. Sitting in the plane’s front seat while Captain W.S. Kenyon of the U.S. Army piloted from the back, Watson photographed Hollywood, Pasadena, Glendale, and downtown Los Angeles, recording images that offered the Times’ readers a radical shift in perspective.

Watson—a member of the Watson dynasty of news photographers—was not the first to photograph Los Angeles from the air. E. H. Husher had done so in 1887, floating 9,000 feet above the city in a hot-air balloon. C. C. Pierce had repeated the feat in 1910. But Watson was likely the first to photograph Los Angeles from an airplane, covering more ground than his predecessors and capturing the city amidst a sustained, landscape-altering growth period.

Photographers today would be hard-pressed to recreate the scenes Watson caught in his lens. Near the center of the above photo of downtown Los Angeles, contemporary newspaper readers would have quickly identified the twin-towered Hall of Records (built 1906) and red-sandstone County Courthouse (1891) at Broadway and Temple. Neither landmark remains standing. Construction of the 101 freeway, which today cuts a wide swath through the photo’s left side, claimed many other structures shown here. And in the bottom-right quadrant, newspaper readers of 1919 would have recognized the quiet residential community of Court Hill, long since regraded, now occupied by the modern administrative buildings of the Civic Center and landscaped grounds of Grand Park.