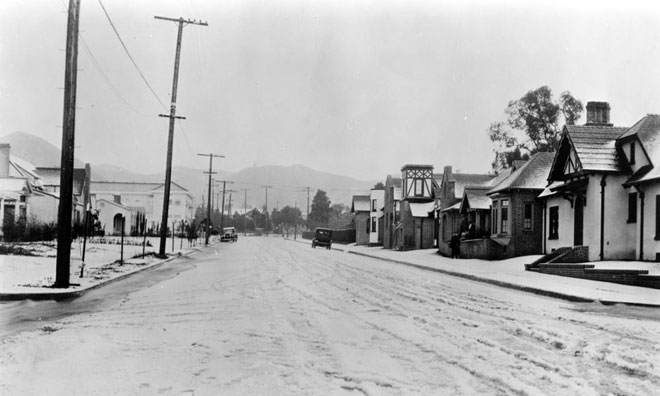 Angelenos dreaming of a White Christmas, take note: The scene above may be set in Hollywood, but it’s no special effects shot. The photo from the Los Angeles Public Library’s collections documents the result of a freak snowstorm that passed over Hollywood on Jan. 22, 1921, dusting the gabled rooftops of the Charlie Chaplin Studios and rendering La Brea Blvd. a slushy mess.

Surface temperatures in the lowlands of the Los Angeles Basin and adjacent valleys rarely drop to freezing. But when the right atmospheric conditions prevail, Los Angeles can become a winter wonderland overnight. The biggest recorded snowstorm to visit the city hit on Jan. 10, 1949. Snowfall lasted nearly three days and varied by location; barely a third of an inch fell on the L.A. civic center, where official measurements were made, but nearly a foot fell elsewhere. Snow blanketed beach cities from Santa Monica to Laguna. Nighttime temperatures dipped into the 20s.

In a city whose traffic arteries seize up at the first drops of rain, snow brought major disruptions. Icy conditions forced the CHP to close portions of the Pacific Coast Highway, and the canyon roads over the Santa Monica Mountains became impassable; an accumulated foot of snow trapped nearly twenty automobiles in Laurel Canyon. The Southern California Gas Company reported record demand as furnaces worked around the clock. In the San Gabriel Valley, orange growers burned smudge pots in a futile effort to protect their crops from frost.

Forecasts this year are calling for temperatures 30 degrees above freezing, so enjoy the snow in the photo. Since the 1949 storm, the downtown Los Angeles weather station has recorded snow only six times—and not once since 1962.

This article was originally published in December 2012.