Home Uncategorized CityDig: A Map for the Millennials 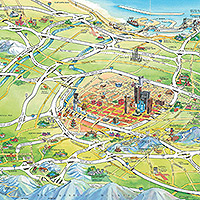 First, I dug up a map for L.A.’s original hipsters (the Beatnik generation). Now, to satisfy the millennials, here is a map that will allow 30-somethings to reminisce about L.A. in the ‘80s (and perfect timing: our July ’80s issue hits newsstands next week). Created for ARCO,  this pictorial panorama celebrates what many Angelenos of that day referred to as the “Buy-centennial,” a riff on L.A.’s 200th birthday celebration happening in 1981. The commemoration of the founding of Los Angeles signaled an official push to leave the doldrums of the 1960s behind.

Strangely enough, this upside-down view of the landscape gives a good idea of what the city looked like for those living in the now-booming Northeast. With the harbor (south) at the top and the San Gabriel Mountains at the bottom (north) one can see the flow of the a fully developed freeway city with the rather moribund downtown at its center. Yet, with the Community Redevelopment Agency at the throttle, downtown was ready for a massive buildup that would create a neck-craning skyline (and provide a little more skyscraper cred amongst big cities).

Some of that is seen here with the Security Pacific Bank building (1974, now the Bank of America Plaza), the UCB building (1973, now the Aon building), the Union Bank building (1967), the Bonaventure Hotel (1978), and the Arco Tower (1972, now City National Plaza). The CRA wanted office towers, and in the next few years they had 444 S. Flower (the L.A. Law building, now Citigroup Center), the Wells Fargo Bank building, the Crocker Center Towers, and California Plaza. In 1981 alone there were 500 building permit applications and 399 structures went up in the downtown area indicating a real commitment to revitalization of the historic core.

That said, wise men like Arthur Frommer warned that tall buildings would not a vital metropolis make and that some street level vitality would be essential in making the place worth visiting. Since the drawing of this map, those words of wisdom seem to have percolated very slowly, but restaurants, concert halls, decent bars, music venues, palaces of sports, a cathedral, museums, and true residential opportunities are re-claiming the slightly stirring old downtown of 1979 where the sidewalks were rolled up at six p.m.

The rest of the map shows some sweet old memories that have since faded away, what with the big city getting more centralized. Marineland, the “Fabulous” Forum, the Schubert Theater, the Ambassador Hotel, Hollywood Park, the Universal Studios Amphitheater, Busch Gardens and the Olympic Auditorium are places where those born sometime before 1979 may have had some nice memories (at a time when people looked up from their phones occasionally). The map also captures in a very economical way the cultural landscape of Los Angeles while preserving a pretty accurate geographical representation of the valley of the smokes. The cartographer here is the talented Swaena Lavelle, an expat Canadian who took to L.A. and created a group of cool pictorials that offer a downright affectionate look at our fair city.