Home Uncategorized CityDig: A Freeway for Bicycles? It Happened in Pasadena 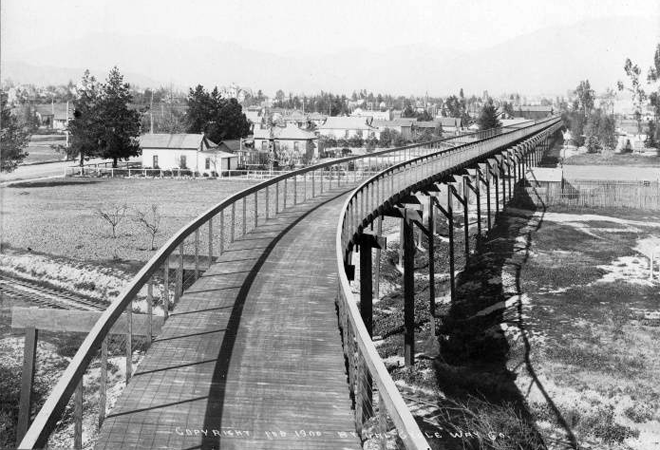 Photograph courtesy of the Pasadena Museum of History

From CicLAvia to a new comprehensive bike plan, Los Angeles has been imagining new ways to get around the city on two wheels. But perhaps nothing today matches the ambition behind a Pasadena millionaire’s turn-of-the-20th-century scheme: a bicycle freeway connecting the Crown City to Los Angeles.

Southern California was then in the grip of a bicycling craze. A dirt bicycle path ran from Santa Monica to Los Angeles, and clubs from Boyle Heights and Riverside regularly raced on dusty roads. Bicycling, it seemed, might be the future of local transportation. But the rutted roads, rugged terrain, and more than 400 feet of elevation change separating Pasadena and Los Angeles presented challenges to a cyclist traveling between the two cities.

Enter the California Cycleway. Winding along the dry bed of the Arroyo Seco, the nine-mile, elevated bicycle path would have soared up to 50 feet above the ground, eliminating at-grade crossings with roads and railroad tracks. A maximum grade of three percent would ensure a pleasant ride, and wooden railings with protective netting would protect riders from falls. With incandescent lights spaced two hundred feet apart, the route would be open both day and night. The brainchild of Pasadena mayor Horace Dobbins, the $200,000 project would be financed through ten-cent tolls collected along the route.

Work began in 1899, and on New Year’s Day, 1900, cyclists crowded around the cycleway’s northern terminus to ride the first, 1¼-mile stretch. Built of Oregon pine and painted green, this short segment pictured above stretched between Pasadena’s two top tourist hotels, the Green and the Raymond, flanked by Del Mar Avenue on one side and Raymond Avenue on the other.

It was the only segment ever completed. By the end of the year, a lack of investment and declining ridership forced Dobbins to abandon his grand plans for a bicycle freeway. Nearly 40 years later, the Arroyo Seco Parkway would trace much of the cycleway’s planned route—designed for automobiles and closed to bicycles.