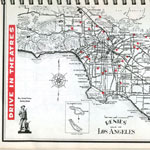 The Renie Map Service, created by the ubiquitous cartographer Jack R. Renie (sometimes Jack J.), was the second major street guide producer in Southern California. Renie was active in map-making as far back as the late 1920s but began his excellent street guides in 1942, referring to the books as “The New Renie Atlas of Los Angeles City and County.”

To separate his product from that of his competitors, Renie made sure the graphic art quality of the hand drawn, single-line maps were striking, and Renie Guides were often created as special editions like this “Civilian Defense-Edition,” “the Convention Edition of 1950,” “the Centennial Edition” or “the Rock Products Zone Guide.”

Renie atlases also gave details on the commercial possibilities in the southland including the burgeoning drive-in movie craze that was taking hold all over the suburbs. Despite its beginnings in New Jersey in the mid-1930s, the drive-in movie experience reached its peak in Southern California in the 1950s and 60s. This page shows over 25 of these outdoor motion picture venues including my favorite, South Gate Drive-In, along with the Circle in Long Beach, the San Val in the Valley, the Gilmore at Third and Fairfax, and the Olympic in West Los Angeles, which originated the fad as the Pico way back in 1935. In 1952, audiences likely took in screenings of The Crimson Pirate, The Way of a Gaucho, The Son of Ali Baba, or Bonzo Goes to College.