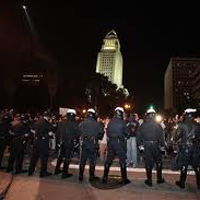 As planned, the LAPD ousted Occupy L.A. protesters from the park outside City Hall early Wednesday morning. A raid on the encampment began with a ten-minute warning from police at 12:30 a.m. Police chief Charlie Beck was on hand as police then enforced the closure of park and began making arrests. In a statement released around 1 a.m., Mayor Antonio Villaraigosa called officials’ approach to removing protesters “measured,” and asked anyone who remained in the park to “please leave voluntarily.” By dawn, more than 200 protesters had been arrested, with bond set at $5,000 per person. A hazardous material team will inspect the park before cleanup crews move in to restore the grounds. Following the raid @OccupyLA tweeted “Solidarity Park was closed at the direction of the 1%… but OLA lives on!”