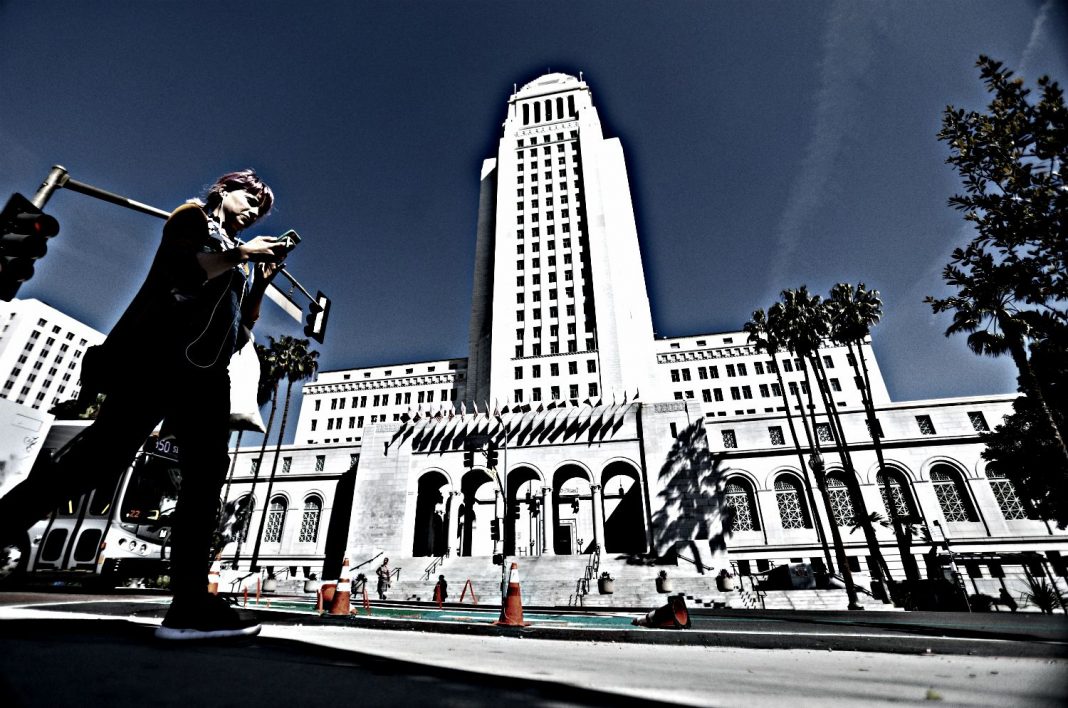 The next domino in the City Hall corruption investigation has fallen, landing with a bang loud enough to destroy reputations, end political careers, and, perhaps, send some individuals to prison for a long time.

On Wednesday afternoon, the U.S. Department of Justice announced that, as part of an investigation into public corruption that it is conducting in conjunction with the FBI, a real estate development consultant named George Chiang has agreed to plead guilty to one count of conspiring to violate the RICO act. That’s not just a handy acronym employed in films—the Racketeer Influenced and Corrupt Organization statute is what investigators use to prosecute organized crime, including but not limited to big-time gangsters.

“The U.S. Attorney is pulling out all the stops,” said one figure well versed in federal investigations.

This is the third recent guilty plea, and follows the March plea agreement by former Valley Councilman Mitch Englander, who, investigators revealed, received $15,000 in cash, meals, a mega-bar bill, and even the services of an escort from a real estate industry player seeking to boost his business. Reading the new 36-page charging document against Chiang, and the 40-page plea agreement that the Granada Hills resident signed on Monday, is like watching prime Mike Tyson unload a series of haymakers. Almost right off the bat the charging document describes something called Council District A Enterprise, which it characterizes as “a criminal organization whose members and associates engaged in, among other things, bribery, extortion, and mail and wire fraud.” There is zero subtlety in the detailing of City Hall happenings, as the documents allege, “In order to enrich its members and associates, the CD-A Enterprise operated a pay-to-play scheme.”

And what pay-to-play there allegedly was! The document details how the cabal, under the guidance of a councilmember, pushed a real estate project through the Byzantine city approvals channel. In exchange, they were gifted cash, consulting fees, concert and sports tickets, international travel, and more. Chiang, 41, has agreed to cooperate with investigators.

The Chiang plea deal connects dots that have been floating around for years, ever since the FBI raided the home and offices of District 14 Councilman José Huizar in November 2018. A few months later reports surfaced of a warrant involving Ray Chan, a City Hall insider who rose to run the Department of Building and Safety, and then became Deputy Mayor of Economic Development under Mayor Eric Garcetti. Neither Huizar nor Chan have been arrested or charged with any crime.

The new documents don’t name names, but you’d have to be dumber than, well, a councilman who accepts six-figure bribes not to be able to guess who might be in the spotlight. The list of allegations describes a “Councilmember A” who sits on the council’s Planning and Land Use Management and Economic Development committees; Huizar was on those panels. Similarly, when it mentions “Relative A-1” being a woman who raised money for a high school and ran for Councilmember A’s seat in September 2018, that sure sounds like it could be Richelle Huizar, who previously worked as a fundraiser for Bishop Mora Salesian High School in Boyle Heights, and then ran for her husband’s seat (she dropped out shortly after the raids; Kevin de León won the March election to replace him). References to the employment history of “Individual I” square up with Chan’s career arc.

It is often said that the devil is in the details, and the details in the documents are damning. Most involve what is termed Company D, identified as a Chinese real estate player that in 2014 spent $100 million to acquire property and propose a project with 650 residential units, 300 hotel rooms and 80,000 square feet of commercial space. Those and other details indicate that it was a proposal by the firm Shenzhen Hazens to replace the Luxe City Center Hotel across from L.A. Live in Downtown.

The documents describe Councilmember A allegedly strong-arming the approvals process, at one point telling the head of Company D that there was no need to involve the mayor’s office, because Councilmember A was in charge. It depicts a scheme with a litany of financial funneling involving Councilmember A, Individual 1, Chiang, and others, with $66,000 being circuitously directed to an associate of Councilmember A. It is unclear if any of the cash made it to the office holder.

There were alleged benefits big and small. In April 2017, according to the documents, Councilmember A and his family took an eight-day trip to China and Hong Kong, with the head of Company D paying for some of the transportation, meals and lodging. The gravy train continued later that month back in the U.S., with Chiang allegedly providing concert tickets worth $1,572 to Councilmember A. Then, in June, the music-loving councilmember allegedly got Chiang to spring for another batch of concert tickets, this time worth $1,670. Sadly, there is no information on who performed or how good the seats were.

The sordid activity wasn’t just about the present, but also the future. The documents detail how, in the first half of 2018, there were lengthy discussions about directing $100,000 from Company D to a political action committee benefitting the campaign of Relative A-1. These coincided with the project moving through the approvals process. One of the juiciest passages details a May 18 breakfast meeting with Councilmember A, Chiang, and Individual 1 in Boyle Heights. “Councilmember A stated that he wanted the contribution now so that when Relative A-1 announced her candidacy, she would have money to pour into the campaign and scare everyone else from running against her,” it reads. “Councilmember A stated that other developers already contributed in amounts of $50,000, $100,000, and $200,000.”

The more you read, the uglier everything gets. There’s a description of Chiang, through his consulting firm Synergy Alliance Advisors, orchestrating a consulting contract with Company D—complete with more than $400,000 in bonuses for securing a trio of tiered approvals—and then agreeing to pay a portion of the fees to Individual 1, who just happened to be Deputy Mayor at the time.

Apparently Individual 1 was ready to do the work, as the documents describe a March 2017 meeting when, “Individual 1 used his official position as the Deputy Mayor to pressure subordinate City officials to take favorable actions on Project D.” The money flowed, and in 2017 Synergy received $772,536 in consulting and bonus fees for its work on the project. Approximately $112,000 was directed to Individual 1.

Chiang faces up to 20 years in prison, and his guilty plea builds on those by Englander and Justin Kim, a real estate consultant and fundraiser who in March acknowledged his role in helping a developer pay a $500,000 bribe to Councilmember A. That involved wads of cash being handed over in paper bags. The new documents detail how Kim and Chiang allegedly knew each other and worked together.

The Chiang-Kim relationship also yields the most amusing moment in the documents. It describes a June 2017 phone call the two had in which they discussed Councilmember A using his influence and his request for financial benefits. It then mentions Chiang requesting to meet with Kim, as Councilmember A was asking for “some very stupid requests.”

At that point Kim told him, “I’m not going to make a comment.”

Chiang answered, “Yeah, let’s not talk about this on the phone.”

Where things go next will be fascinating. The Department of Justice press release detailing the Chiang plea refers to “a wide-ranging ‘pay-to-play’ scheme,” so more charges could be coming. The tongues of City Hall watchers are wagging at warp speed as everyone wonders just how high into local government the investigation will go.