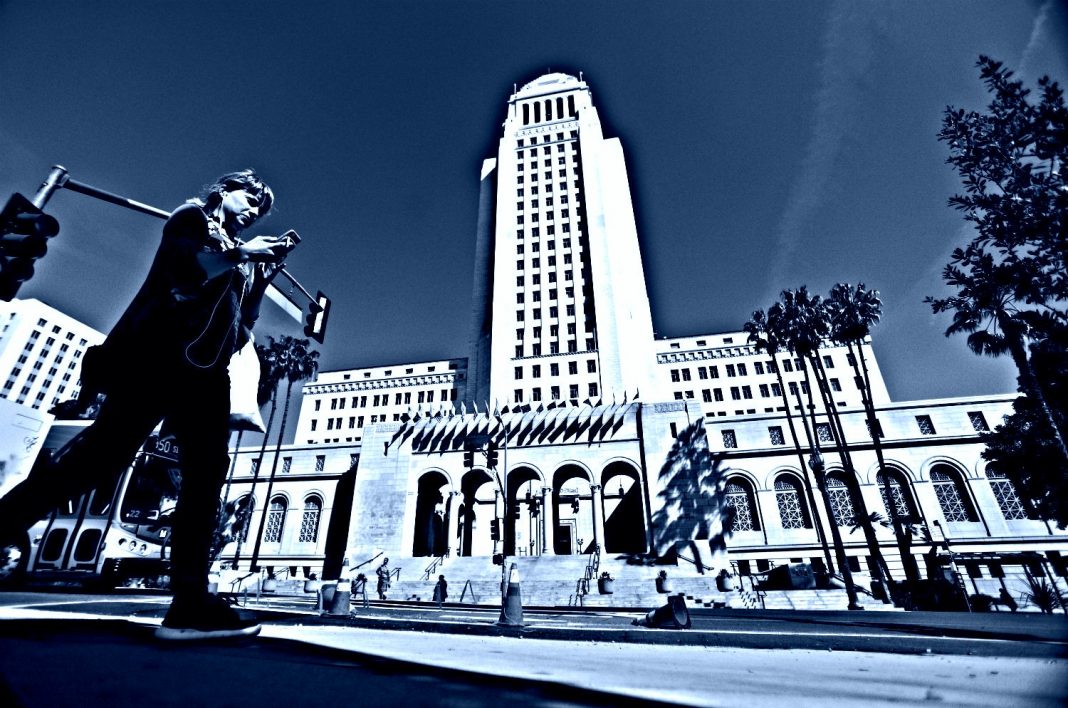 Last week, the Los Angeles office of the U.S. Department of Justice, which has rolled across the city’s political landscape like a division of Panzer tanks, unsealed a 41-count “superseding indictment” that builds on the case filed against Jose Huizar over the summer. Not only is the disgraced former District 14 rep at risk of getting sent to the pokey for charges including conspiring to violate the RICO statue, but so are a former deputy mayor and a pair of big-time developers.

On one hand, with its racketeering references and other sordid details, the 138-page indictment packs all the entertaining aspects of an L.A.-centric crime novel. On the other hand, it is horribly distressing, with the recognition that the alleged misdeeds were purportedly perpetrated by people the public trusted.

Altogether the Feds have charged nine people as part of Operation “Casino Loyale.” If they all go to the same prison, that would be enough to field a complete penitentiary softball team.

The situation is serpentine, complex, and ongoing. Here are some things to know about the saga and what might happen next.

Talk about playing the long game! FBI agents raided Huizar’s home and offices back in November 2018, and now, more than two years later, the case against him has been expanded, and charges of bribery, honest services fraud and other crimes have been filed against Ray Chan, a former deputy mayor and general manager of the city Department of Building and Safety; Wei Huang, the 55-year-old billionaire CEO of Shen Zen New World, which had sought to build a 77-story tower in Huizar’s downtown district; and Dae Yong “David” Lee, who owned a company seeking to develop a mixed-use project on Hill Street, also in Huizar’s district. In news reports, attorneys for Chan and Lee adamantly denied allegations of wrongdoing.

According to one person well versed in federal investigations, the lengthy legal gestation period reflects the exacting detail being taken by the office of U.S. Attorney Nick Hanna. The charging document goes into depth on four different alleged bribery schemes, describing shady behavior dating back to early 2013, and running up until the month before the raids.

“They are meticulous,” the observer said of the DOJ. “They want to be able to show all the moving parts in the case.”

Already, five people have pleaded guilty as part of the investigation into the pay-to-play environment in City Hall. That includes former District 12 Councilman Mitch Englander, and a cadre of Huizar affiliates and employees. The newly charged crew is notable in that it includes wealthy individuals capable of hiring top-tier attorneys. This in turn creates its own sort of high-stakes chess game; Hanna knows that the defendants will trot out a team of brilliant legal minds and enlist skilled investigators, including former federal employees. The observer anticipates that Hanna’s crew will be ready and likely already believes they have enough to put the defendants away.

This is not a situation where a prosecutor proverbially throws mud against a wall to see what sticks.

“That’s why you’ve got 138 pages going back to 2013,” the observer said, adding that this is not a situation where a prosecutor proverbially throws mud against a wall to see what sticks.

“They’re going to stucco the wall,” the person said.

Huizar, who has pleaded not guilty to all counts, is scheduled to stand trial next June, and the game plan is to try the other newly named defendants with him (one or more could make a deal to avoid prosecution). Get ready for the trial of the year.

One intriguing realization from the charging document is that despite everything laid out about the corruption scandal, much more is being held back. In addition to the projects mentioned, the document lists seven other development firms that interacted with the “CD-14 Enterprise,” and four of these are described as China-based entities. There are references to anonymous City Hall employees, unnamed defendant relatives, and more. The implication is that for everything we know, a lot more is out there.

That roster of players helps reveal how deeply enmeshed the Feds are in the workings of the CD-14 Enterprise, where the alleged activity includes money laundering, taking bribes from developers with projects in the district, and securing campaign donations for a Huizar relative planning to run for his seat after he was termed out (his wife Richelle Huizar in 2018 entered and then dropped out of the race; she has not been charged with a crime).

The document is thick with excerpts from text messages, phone calls, and more. One can just envision investigators sitting in a stuffy van with recording equipment, headphones and stale coffee.

There are references to an alleged scheme involving Huang providing $600,000 to help the councilman settle a sexual harassment lawsuit, with Chan, real estate consultant George Chiang and former Huizar special assistant George Esparza allegedly playing supporting roles. The document details a June 22, 2017 phone call in which Chan allegedly states, “I consider [Huizar] an ally, as my brother,” and Chiang replies, “But the issue is that you already put… your ass on fire for [Huizar], you did a lot of stuff for him.”

This is the best wire since The Wire.

Only one side of the story has been told, and the defense teams will ultimately craft their own narratives. However, right now the proverbial smoking gun looks more like a smoking arsenal. Consider the section of the document related to a proposed reinvention of the Luxe Hotel across from L.A. Live. In October the Chinese development firm behind the effort agreed to pay $1.05 million to settle an investigation into its role in the corruption scheme. The new document verges on the salacious as it describes a recorded conversation between Chan and Chiang.

“Specifically, Chiang explained that defendant Huizar asked him to coordinate a trip to Cuba for defendant Huizar and a woman with whom he was having a secret romantic relationship,” one passage reads. It then mentions Chiang explaining that obtaining special visas for the trip “would risk potentially exposing their corrupt relationships: ‘I told [Huizar], I said look, we’re all gonna be on record and if something happens, everything, everyone’s dead.”

A fortune teller couldn’t have said it better.

One thing made crystal clear during the proceedings is that the Feds don’t like efforts at obfuscation, and are usually ahead of the game. Past court documents detailed how, in February 2018, Englander and a businessperson drove around in the councilman’s car with the stereo blasting in the effort to overwhelm any listening device (the person was working for the FBI—oops!). There are copious references to suspects being told it is a crime to lie to the FBI, and then allegedly lying to the FBI. There are numerous mentions of members of the CD-14 Enterprise telling other individuals how to respond to questioning, resulting in witness tampering charges.

Sometimes it gets comical, such as a passage in the new document that describes Chan meeting with the FBI in his office on Sept. 12, 2018. According to the document, after the meeting, “Chan immediately inspected the chairs in which agents sat to search for hidden recording equipment he suspected of being placed there by the agents.”

By that point, the investigators seemingly already had more than enough to make their case.

Members of the public and elected officials alike have expressed disgust at what has been revealed so far. The key phase is “so far.” The press release for the new charges specifically mentions that this is an “ongoing corruption investigation into Los Angeles City Hall,” and asks members of the public with knowledge to come forward. The people who have pleaded guilty are all cooperating with investigators.

Outside of the DOJ, no one knows what will come next.