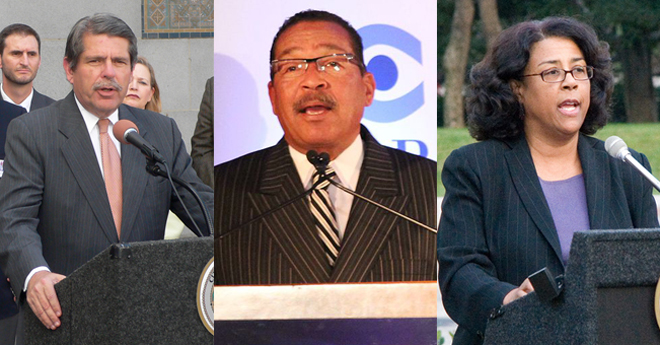 We phoned Los Angeles County Supervisor Zev Yaroslavsky, City Council President Herb Wesson, and primary mayoral candidate and City Councilwoman Jan Perry today to get their reactions to the results of yesterday’s election. Here are highlights from our conversations:

On what the election results mean for the city and the “lobbying industrial complex”:
“I think the election signals a new generation of leadership for the city. Eric’s election and [Mike] Feuer and [Ron] Galperin’s elections represent a group of smart, public policy people, and it bodes well for the city. The leadership of the city has a lot of challenges ahead of it and they’re going to have to say no to their friends. Eric has certainly been tested in this election and I think he has the capacity to do what’s best for the city and stand up to any interest group if he has to. He’s proven that you don’t need the big money from interest groups that financed some of the campaigns this year to succeed politically.

What does the election mean for the Department of Water and Power Union? I think Eric Garcetti is going to have to determine that. I certainly think it has sent a clear message not just to that union but to the lobbying industrial complex as I call it—and both candidates benefited from it to some extent, but it accounted for a bigger percentage of Greuel’s finances than Eric’s. It sends the message that you don’t have to rely on those interests to get elected, whather it’s to the city council or to the mayor’s office—or frankly, to the board of supervisors.”

On the mayoral tasks Eric Garcetti should tackle first:
“Eric has two immediate challenges to face. One is to put his administration together. My advice there is, in the words of John Wooden, “be quick but don’t hurry.” He needs to get the right people in there and not rush to the point where he gets the wrong people and has to make changes. Everybody has that experience. I had it over the years, Villaraigosa had it, Bradley had it—everyone does. He should cast his net broadly for competent people, people who will give him unvarnished advice so he can make up his mind. He’s a very smart person who can get conflicting points of view and synthesize them, so I think he would benefit from surrounding himself with people who are as smart or even smarter than he is, people who can compensate for the weaknesses he may think he has so he has a complete package.

On the policy side, his first challenge is to get the city’s finances in order, to deal with the transportation issues that are quite timely right now. He’ll have to hit the ground running with the MTA. And he’s got to deal with the salary obligations that the current contracts with the employee unions require—and he’s going to have to do it soon. On the morning of July 1 he’ll give his inaugural speech and in the afternoon I would suggest he start dealing with that, because it will drive the budget challenges immediately. If you don’t deal with that, you’re not dealing with the city’s fiscal issues.”

On deciding not to run for mayor himself:
“I’m going to see my granddaughter this weekend, which I doubt I would have been able to do if I were in his shoes. I’m very sanguine and happy about my decision. It was carefully thought out and I did what I thought was best for myself and I have confidence that the new leadership of the city is up to the task. I look forward to seeing how they do and I’m certainly willing to help in any way I can.”

On what the election of Eric Garcetti means for the city council:
“For me, to have a mayor that served six years as the council president—it’s as if Eric walked in the shoes that I’m walking in, so I think the relationship between the council and the mayor will be one of the better ones that you’ve seen. Eric knows what one has to do when one is president of the council. He knows how to put the votes together and he knows the challenges I’m going to face. I think if you look back at the 3 million debates the candidates had in the primary and in the general election, I think he demonstrated how intelligent he is, how creative he is, and how calm and cool he can be under pressure. I think Eric told a story as to his vision for Los Angeles and what he wants to accomplish—and he asked people to vote for him because of it. I think Wendy’s problem might have been saying, “Bill Clinton says vote for me. Magic Johnson says vote for me, so-and-so says vote for me,” instead of shaping who she was as a candidate.”

On how Eric Garcetti edged out Wendy Greuel:
“He gathered a large coalition of people and support and was able to mobilize them in a positive way. I think it signals a new era in the way we move forward. He said last night—which I thought was great—that we hope to look at the recession in the rear view mirror.”

On why Wendy Greuel was particularly popular among black voters:
“I think people were enamored with the endorsements by Magic Johnson and Bill Clinton. I know that because when we worked on the phone banks those were the two oft-cited reasons for supporting her. People would actually say to me, ‘Well Magic said…’ or, ‘Bill Clinton said she was good.’ That’s what it was.”

On what’s next for Perry after she leaves the city council later this month:
“I gotta figure it out. That’s an honest answer. I’m interested in reformist ideas and I like to build. I like to recalibrate. I like to create change opportunities—all those things.”

District 10 Hurled Back In Time as Political Battle Royale Intensifies