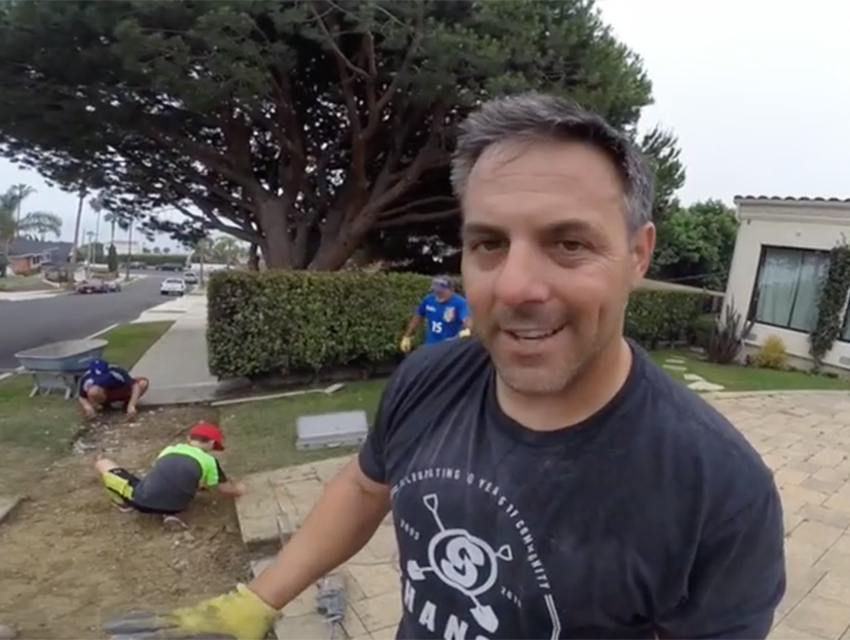 The City of Los Angeles is investing $1.4 billion into sidewalk repairs, but Joe Buscaino, 15th District city councilman and chairman of the Public Works Committee, is repairing his own. In a video uploaded to his YouTube channel over the weekend, Buscaino tears out the tree roots that have buckled the sidewalk in front of his house and pours concrete for a brand new walkway. Why all the backbreaking toil?

“It’s a property owner responsibility to ensure that the sidewalk is accessible,” Buscaino says in the video, as day laborers (his son and nephews) hack at roots with a mattock. “The damage that was caused by my sidewalk in front of my home was caused by a tree on private property.”

He’s got an ulterior motive, too: emphasizing that the city isn’t responsible for fixing sidewalks that have been damaged by roots from trees in homeowners’ (or their neighbors’) yards. That burden falls on the shoulders—and wallets—of the homeowners themselves.

Buscaino, ever the model citizen (he biked 25 miles to work in the rain for crying out loud), is leading the charge, with the help of his father, son, nephew, and Uncle Sal, who, conveniently, is a licensed contractor with years of masonwork experience.

According to the L.A. Times, the city has begun a project of repairing sidewalks over the next 30 years, starting with the sidewalks near government buildings, followed by transportation corridors, hospital areas, business districts, and, lastly, neighborhoods (but only sidewalks damaged by public tree roots, remember). The Public Works Committee and the Budget and Finance Committee are hosting a public meeting to discuss the major project tonight.

Looking for a little help repairing your own sidewalk? We called the councilman to see if Uncle Sal is still in business, and (alas!) he’s retired. His main occupation now is babysitting the Buscaino kids, so it looks like you’re on your own.