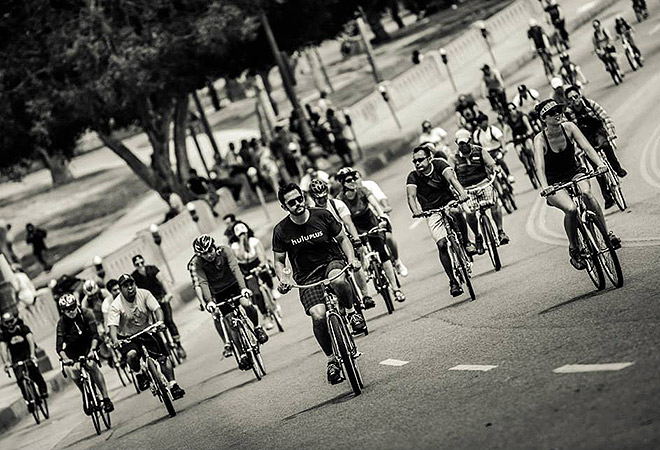 Good news for bikers and walkers, bad news for drivers: CicLAvia has announced its 2014 lineup, and Angelenos can count on navigating three of the organization’s car-free events over the course of the year—be it via walking, biking, or Google mapping an alternate route.

The institution, which encourages Angelenos to cast their cars aside so as to experience the city’s neighborhoods in a new way, will be bringing back two classic courses (Iconic Wilshire Boulevard and Heart of LA) and inaugurating a third: one that winds through South Los Angeles, connecting Leimert park to the Central Avenue corridor. As in past years, each event will run from 9a.m.-4p.m. and will subsequently shut down miles of city streets. Get the full rundown of the three functions below:

Iconic Wilshire Boulevard
When: April 6th, 9a.m.-4p.m.
Where it goes: From DTLA to Museum Row
Why you should do it: In light of construction on the Purple Line subway extension, this is the last year CicLAvia will be able to run this particular route until the Metro’s work is done (the projected completion date is sometime in 2023—just saying). If Iconic Wilshire piques your interest, it’s now or probably never.

Heart of LA
When: October 5th, 9a.m.-4p.m.
Where it goes: Echo Park, East Los Angeles, Grand Park, and the length of Broadway (from 9th to Chinatown)
Why you should do it: Downtown Los Angeles is the metropolitan equivalent of Jennifer Lawrence: laid back, on the rise, and in the news for all the right reasons. What with the opening of the new Ace Hotel, a slew of new restaurants, and myriad stylish boutiques, perusing the area on foot is sure to be an adventure.

South Los Angeles
When: December 7th, 9a.m.-4p.m.
Where it goes: From Leimert Park to the Central Avenue corridor
Why you should do it: As this year’s only new route (we’ll have to wait until 2015 for another newbie that will explore the San Fernando Valley), the novelty should be enough cause to give it a whirl. Besides, while the above courses are surely crowd pleasers, CicLAvia-philes have likely completed them in years past. Forego the familiar and try South L.A. on for size—after all, Leimert Park was one of the city’s first planned communities.