Home Holiday What Christmas in L.A. Was Like in 1851 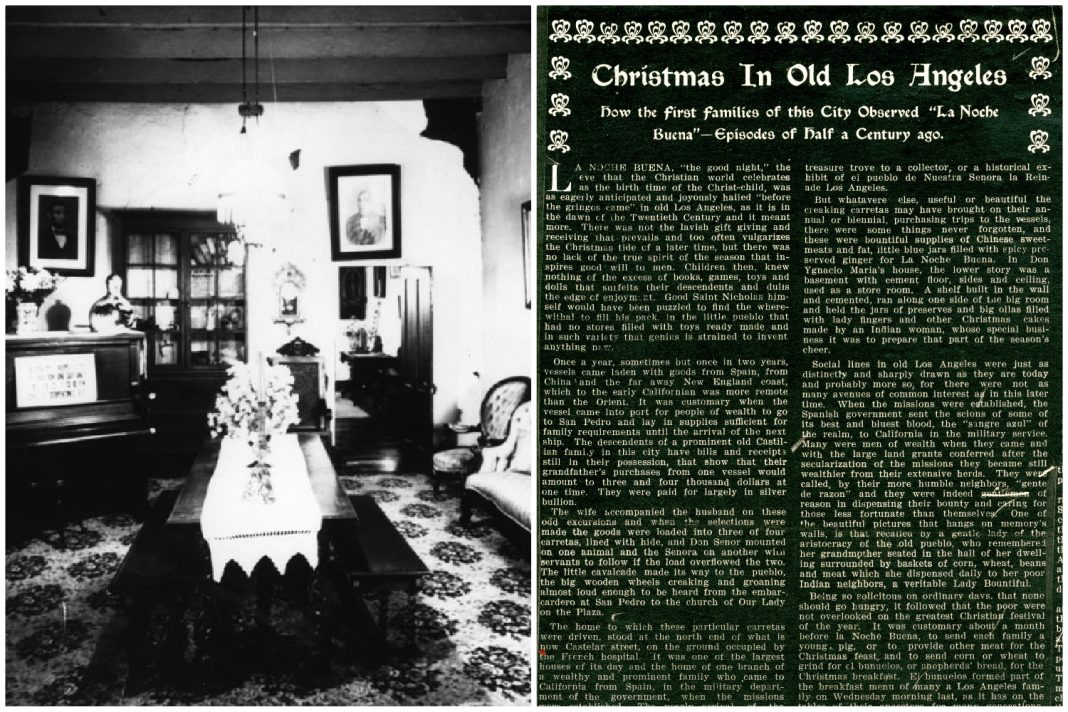 We don’t have a typical Christmas season here in L.A., like the ones in syrupy movies with snow, ear muffs, winter coats, and people standing in a blizzard preparing to jump off a trestle. We do have our traditions, like riding your new bike in 80-degree Christmas morning weather or showing off the new warm clothes you get to wear maybe six weeks a year. I don’t know any other kind of Christmas since I’m a native Angeleno and have never left the Southland during December except for a disastrous cruise to the Caribbean in 1988. Never again.

They may not be snow-covered, but L.A. is home to some some great contemporary holiday traditions, like Christmas Tree Lane, the Enchanted Forest at Descanso Gardens, and the yearly delight of getting semi-sozzled holiday parties that bring together all religions and creeds under the umbrella of the alcoholidays. Vintage revelers like myself have to be wary of mentioning the “old days” lest we end up getting “OK, Boomer-ed” on Twitter, but if the old days are 1851, I think I can get a pass.

There are many boxes and drawers at downtown’s Central Library that contain all manner of unexplained, random historical ephemera. Once I found an impressive black ribbon in the back of a map drawer that was a mourning vestment when Abe Lincoln’s funeral train passed by, and recently I ran into a negative projection of an article published back in December of 1901 by a lady named Mary M. Bowman who was a reporter at the old Los Angeles Herald. The article was published under the banner of “The Capital,” which appears to have been a special edition. 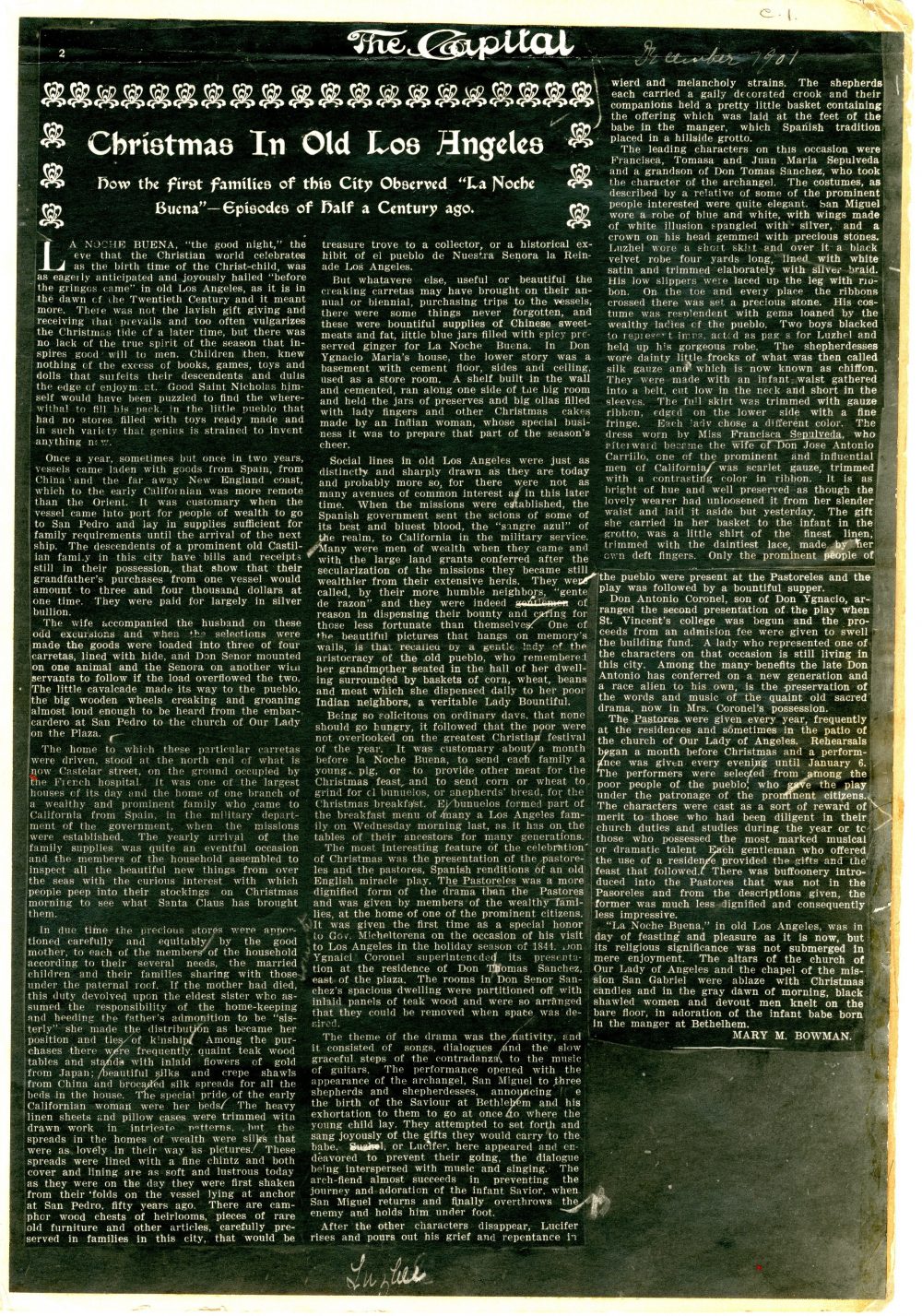 Bowman was a legit historian and strong feminist in times before the word was even used. She was editor of two newspapers, wrote features, and even penned poetry during her six years on the beat for one of the major morning papers in Los Angeles. Moreover she was a charter member of the Friday Morning Club of SoCal and an honored member of the Los Angeles Historical Society. A unique holding in the History Department of LAPL are the Bowman Scrapbooks, which reflect her meticulous collecting of local history.

Bowman was also an expert on colonial Los Angeles and her columns often explained the way early Los Angeles worked including the roles of the indigenous people and women in the pueblo. Despite the rather stiff tone of the Christmas story it does make for amusing reading since it reflects the place fresh from statehood, when the wide-open town contained about 1,500 souls total.

The big night is referred to as “La Noche Buena” and the Spanish influence is heavy in the celebrations here. Mrs. Bowman starts right up in letting readers know the setting here is “before the gringos came” and life was simple enough that gift-giving was extremely modest and stores selling ready-made toys did not exist in this town. Such ostentation was reserved for the few well-to-do Angelenos who would ride down to San Pedro where Spanish ships would dock every year of so filled with goods from Europe, China, or the Northeast coast of America.

Carretas lined with hides would be brought by families and loaded with teak furniture, silk dresses and shawls, tables inlaid with gold from Japan, and prized silk bedspreads from China. Apparently, impressive beds with linen sheets and silk spreads were a wished-for luxury in the old pueblo, where bathing was a luxury unless you wouldn’t mind taking a dip in the mother ditch where all kinds of stuff happened. Yet, for the lucky few there would be camphor wood chests full of delicacies like “sweetmeats” (aka jerky), the occasional orange, and jars of preserved ginger, which was quite rare. If you had the money (silver bullion preferred) you could load up and haul it all back to the hacienda. Kind of like visiting Costco 170 years ago.

Many early domiciles in the pueblo had basements where such foodstuffs might be stored, and preserves, “ollas” of ladyfingers, and Christmas cakes would be part of La Noche Buena. For the lucky families, the mothers would distribute gifts to the entire household and Santa Claus was not even mentioned. Even in this small pueblo society we already find that the upper-crusters known as the “sangre azul” take their place atop the heap. The patriarchy was known as “gente de razon,” and even a working woman like Mrs. Bowman claimed they were benevolent. As described, the wealthy would give the less fortunate a young pig a month ahead of Christmas to fatten up for the yule feast. Also corn or wheat was given to make a treat of the season “bunneolas” (Shepherds Bread) to be consumed on Christmas morning.

A large part of the religious component of the celebration involved the performance of “Pastoreles,” small miracle plays done in private homes that involved songs, dialogues, and “stately dances” that would be accompanied by guitars, the preferred instrument in the pueblo. Depending on the ages of family members, this might have been glorious or might have amounted to teenagers having to watch their parents sing karaoke. The traditions of these Christmas plays were traced back to the 1840s in the second decade of Mexican rule, when Governor Manuel Micheltorena hosted such a fete plus a bountiful supper with the warning that it would be for “prominent people” only.

Despite this early caste system Mrs. Bowman goes to great lengths to portray the benevolence of the prominents. This paragraph says it all: “One of the beautiful pictures that hang on memory’s walls is that recalled by a gentle lady of the aristocracy of the old pueblo who remembered her grandmother seated in the hall of her dwelling surrounded by baskets of corn, wheat, beans, and meat which she dispensed daily to her poor Indian neighbors. A veritable Lady Bountiful.”