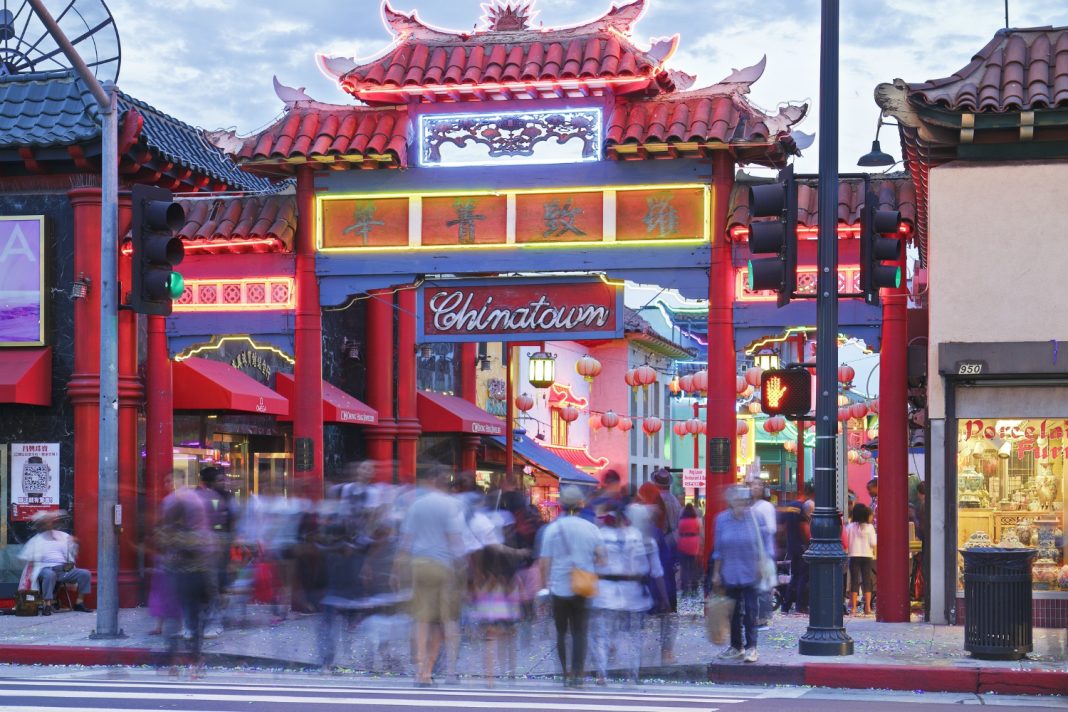 This article was published just hours before Mayor Eric Garcetti issued his Safer at Home order, which mandates the closure of non-essential businesses until at least April 19.

For Jonathan Yang, opening Thank You Coffee with his business partners as a pop-up inside Chinatown Central Plaza stationary store Paper Please, was a great opportunity. “We were excited to do anything because we had been looking [for a space] for so long,” he says by phone on Tuesday. But, there was also a personal connection. Yang’s grandma had lived in the neighborhood. While he was raised primarily in Temple City, Yang spent a good chunk of his early childhood in Chinatown, where his grandmother watched him. “It felt special to be someone who kind of grew up there, to be back to try to push the community forward and bring it together,” he says.

But, when the pop-up began its run in March, foot traffic dwindled. “As far I knew, I thought that was the new Chinatown, that things were slower,” he says. “Then, talking to other people in the area, I realized that it’s because of corona[virus] and people are avoiding Chinatown, Koreatown.”

This week, fear of the novel coronavirus and efforts to stop its spread have affected nearly every facet of life in Los Angeles, but news of the illness has been impacting businesses in Chinatown for even longer, as mealtime and weekend crowds thinned over the course of several weeks.

“The neighborhood feels a lot more empty,” says Matthew Middleton, owner of Salt Box Records. “The foot traffic is what’s really dried up.” Middleton, who opened his store in Central Plaza three years ago, says that he noticed smaller crowds around Valentine’s Day. “It might just be in my head, but probably not,” he says. “It feels like Chinatown has really come to a standstill. Obviously, in the rest of L.A., it seems like everything has slowed down, but it feels like Chinatown is being treated like the epicenter.” On Wednesday, he announced the shop would be closing for at least the rest of this week and next.

As yet, Chinatown has been untouched by COVID-19. A March 2 Los Angeles Times story about the decrease in business at popular restaurants like Yang Chow and Foo Chow noted that there hadn’t been a single case of the virus documented in the neighborhood. According to a by-neighborhood breakdown of confirmed cases, that’s still true.

I’ve lived in Chinatown for seven years and have watched crowds ebb and flow based on days of the week, time of day, time of year. At the Golden Dragon Parade on February 1, the vibe was different. The parade celebrating the Lunar New Year is the neighborhood’s cornerstone event, a tradition held for over 120 years in the city of Los Angeles. It’s typically packed with people. This year, though, I could stand curbside on Broadway without bumping into anyone. It wasn’t empty, but there was a visible drop in attendance.

Paper Please, where Thank You Coffee’s pop-up is located, opened in early February. “We were trying to push to open for the Chinese New Year parade because we heard that was one of the biggest events,” says Christine Kim who co-owns the stationary shop. She says that she and her business partner had heard from neighbors that turnout this year was lower than normal. “We were kind of surprised by that,” she says, adding, “I don’t think, at that time, it was a huge deal, as opposed to now.”

“There wasn’t as many people in the crowd,” says Rigo Jimenez, owner and director of Eastern Projects Gallery. Jimenez, who grew up in L.A. and has been visiting Chinatown since he was a child, opened his art gallery here in 2016. He too has noticed the recent decline in visitors to the neighborhood and how that was affecting local restaurants.

“I eat here every day,” he says. “I started noticing less and less people.” He mentions frequenting Plum Tree Inn, across Broadway from the gallery, and Pho 87 further down the road. Where, previously, he would see the restaurants bustling, that hadn’t been the case in recent weeks. For contrast, he mentions Panini, the Mediterranean restaurant on 9th Street downtown. At a time where he was one of few, and sometimes the only, customer in Chinatown spots at lunchtime, he says, Panini would be bustling.

Yang describes two different groups that come to Chinatown, “foodies and hipsters” in one, “tourists and the general crowd” in the other. “I think the foodies and the hipsters, I think the news didn’t affect their decisions as much. They’re still supporting their favorite restaurants and coffee shops,” he says. As for the other group, he says, “there’s a general fear” that’s affected not only Chinatown, but other Asian neighborhoods in Los Angeles. And that may be fueled by stereotyping, which Yang finds “ironic” given the neighborhood’s demographics. Chinatown has a considerably high senior population and, as Yang says, many have lived in the neighborhood for a very long time.

“I think that when we realized that a large part of it had to do to stereotyping, it was hard. In some ways, we can’t really do anything about that,” he says. “I understand that people want to avoid areas that they think are especially dangerous, but it’s sad to see that they jump to conclusions that are unfounded too.”

But, at the end of last week, when coronavirus-related news gripped Los Angles, leading to cancelations and closures across the city, business owners faced a dire concern. How do you stay afloat when people are going into self-isolation? It’s a particularly precarious position for a new business like Pearl River Deli in Far East Plaza, which opened less than two months earlier.

“I think the most challenging thing is that, when you’re starting out, you’re conscious of how much money your spending,” says Lee, who grew up visiting Chinatown with his family in the ’90s and reconnected with the neighborhood while working in restaurants downtown. On the Friday before restaurants were ordered to close dine-in services, he was thinking about how he could run the Cantonese restaurant, which focuses on “simple, comfort classics” as efficiently as possible. “If anything, we need to make sure that our staff gets paid first and that we can pay the rent and then our suppliers,” he says. “After that, everything else is optional.”

He was also thinking about how to continue serving customers who were limiting their public engagement. Pearl River Deli dropped its to-go number on Instagram the day after Mayor Garcetti’s announcement that dine-in services were barred in the city until at least March 31.

Meanwhile, at Paper Please, upcoming events and workshops are on hold, retail hours have been shortened, and the team is focusing on its website, where customers who might normally stop by in person can place orders for curbside pickup.

Thank You Coffee is still set to run through May. Right now, they’re abiding by the take-out-service-only policy. Customers can place an order by text, pay by Venmo, and retrieve their drinks from a no contact stand that Yang recently built. They’re also encouraging people to buy whole bean coffee and loose leaf tea, so that they can stay home.

“We want to take heavier measures now to prevent further spread in the beginning,” says Yang.

RELATED: How Is L.A. Enforcing Its Bar and Theater Shutdown?