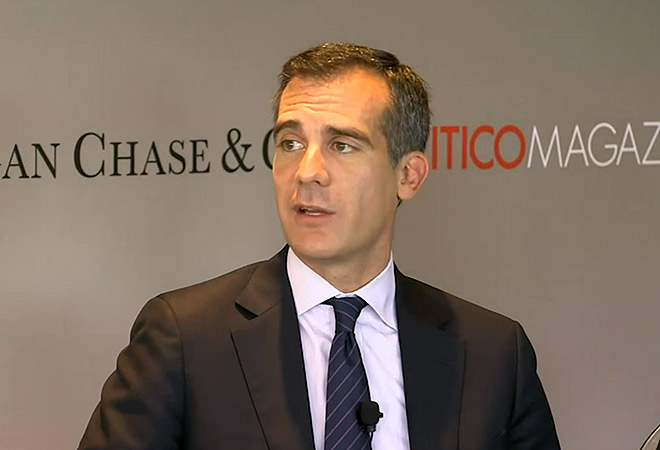 As federal lawmakers argue over how to deal with the unprecedented number of unaccompanied children from Central America that have been detained by the U.S. Immigration and Customs Enforcement this year, Los Angeles mayor Eric Garcetti has raised his hand with a suggestion: let the city of L.A. help.

Garcetti announced at an event hosted by Politico on Tuesday that Los Angeles would help shelter some of the more than 52,000 children taken into custody after crossing the border, and that he has been in touch with a federal agency about how to do so. Details of the relief effort are just coming together, but here is what we know now:

When will some of the detained children come to Los Angeles?
Garcetti says he has already contacted the U.S. Department of Health and Human Services regarding his plan of action. According to the mayor’s spokeswoman, Vicki Curry, a timeline as to when children would arrive is not yet set.

Where will they live?
“The HHS asked mayor Garcetti to convene a meeting with local non-profit organizations,” Curry told us, and so the Mayor’s Office of Immigrant Affairs met with 50 organizations (among them the California Community Foundation, the Weingart Foundation, and the Red Cross) who have volunteered to help find homes for some of the children. Other cities also open to welcoming the young immigrants are taking matters into their own hands: the City of Bell has been in talks with the Salvation Army as well as federal officials to set up a shelter for detainees. Should that plan move forward, the Los Angeles Times reports, Bell would be able to take in 125 children.

What will it cost to transport and shelter the children and who will cover the expense?
Garcetti was not able to state how much this venture could cost, but he said that federal funds would be used to pay for the immigrants’ temporary shelter and legal representation. Curry shared that no city services or resources would be allocated for the effort.

Will the children become U.S. Citizens?
It’s unclear. Unlike immigrant children from Mexico, children from Central America are protected under 2008’s Trafficking Victims Protection Reauthorizaton Act, which was initially instituted in an effort to prevent child trafficking. Per the law, Central American children are required to have a court hearing to determine if they will be either deported or permitted to stay. The process is lengthy and only becoming more so: “Because of a backlog, which is growing greatly with the recent influx…a kid released tomorrow could stay in the U.S. for up to three years waiting for that date,” says NPR’s Carrie Kahn.

Why should these children come to Los Angeles?
It is Garcetti’s feeling that welcoming illegal immigrants into Los Angeles will strengthen our community rather than weaken it. Yesterday he referenced a statistic that 62 percent of Los Angeles residents are either immigrants or children of immigrants. “Our competitive strength will come from being able to integrate immigrants that aren’t going anywhere, that need to be earning scholarships, paying more taxes, having drivers licenses; we can only gain from that,” he said. “The status quo as it is is broken and costs us a lot of money.”

Garcetti’s proposal, while commendable for its compassion, has raised opposition from homeless communities. In an interview with CBS, Ted Hayes, the founder of the local homeless facility Dome Village, pointed out that there are American children on our own streets who we should be focusing on first. “It’s kind of a slap in the face to U.S. citizens,” Hayes said. “It’s embarrassing. It’s hurtful. Because it’s like a father saying that he loves children outside of the family more than he loves his own…We feel for them. We feel their pain. But we are feeling pain of our own children first.”

When asked how the mayor’s office was responding to Hayes’s comments, Curry said, “We aren’t.”