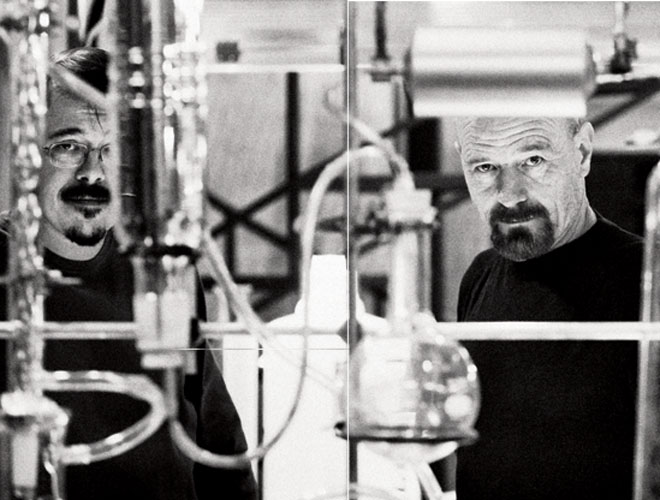 Vince Gilligan, the creator of Breaking Bad, has had the final season under such strict lockdown that actors were delivered scripts with other people’s lines blacked out. I was asked to sign a confidentiality agreement before I could step foot on the set in Albuquerque, and once there, I was never left alone. Which was smart. Draw whatever parallels you like to methamphetamine, fans of the show want a fix and they want it now.

So I admit to being momentarily distracted during my interview with Bryan Cranston when I see what I think is a script poking out from his Malcolm in the Middle shoulder bag one afternoon. The crew is setting up to shoot a scene from Breaking Bad ’s fourth-to-last episode, and we sit on director’s chairs in the middle of a suburban street, a fabric canopy serving as a makeshift shelter from the mighty New Mexico sun. All down the block, neighbors and their pets stand in driveways watching a little bit of television history. (Tune in on August 11.)

But at the moment I can’t afford to peer at Cranston’s script because keeping up with him takes focus; the man is quick. When a skinhead with a swastika neck tattoo walks by, I say, “I’m guessing that’s a bad guy.” “No, just misunderstood,” Cranston shoots back, shaking his head with pretend sadness. I note that the bruise on the actor’s cheek looks real, and he says, “It is real. Vince decked me.” Sporting a twill bucket hat like the kind Bob Denver wore in Gilligan’s Island, Cranston is clad in all beige as befits an international meth kingpin trying to pass for AnyGuy, USA.

I’m interviewing Cranston in snatches between scenes—first in a bedroom, where he flings himself into an odalisque position and sighs dramatically, “I do all my interviews like this”; the second time, on a porch swing. “We’re going backward,” I say of our move from bedroom to porch. “Next time we meet we’ll be shaking hands on the street,” he says, practically before I finish my sentence.

Cranston is known for comedy, which may be why executives at Sony were unsure he was the right actor for the role of Walter White. Gilligan asked them to watch a 1998 episode of The X-Files—Gilligan had been a writer and producer on the show—in which he had cast the actor as an anti-Semite with a bizarre disorder. Cranston had made the miserable wretch somehow sympathetic.

In addition to depth the actor brought a sublime physical agility to his part—one thinks of a tall Buster Keaton or Bill Irwin when Walt, driven by some profound desperation, sends his body hurtling awkwardly through a plate glass door or over a hedge, where he stops to box with a stray vine. Gilligan wrote that mix of light and dark into the first words uttered on the series: “My name is Walter Hartwell White. I live at 308 Negra Arroya Lane.”

And so began the most unlikely crime show ever to ignite American audiences. Breaking Bad does not take as large a view of the world as did, say, The Wire, which detailed the web of corruption binding all human institutions, high and low. Like The Sopranos, Breaking Bad gets a lot of juice from juxtaposing criminality with the humdrum of the everyday—setting after-murder meals at Denny’s gave the writers endless pleasure. But Breaking Bad is something else entirely. It tells a story central to Western civilization, from Christopher Marlowe’s Elizabethan play Doctor Faustus to The Godfather—of a man who gains the world but loses his soul—and it tells it in a new way, in a way that makes that dusty tale profoundly personal and alive.

At first glance it seemed the show might be about the recession and health insurance. The Walt we meet in the 2008 pilot has two jobs and can’t afford decent care when he’s diagnosed with inoperable lung cancer. Inching along in his faded Pontiac Aztek, Walt evokes a painful pity; he’s mired in circumstance and in the residue of choices he’s made. He turns to meth-making so that he can leave money for his pregnant wife and their son, who struggles with cerebral palsy. Something in the pilot’s diabolically comic detailing of Walt’s humiliations signaled that Gilligan had large ambitions, that major groundwork was being laid. “The only time we see early Walter come alive is when he’s teaching chemistry,” says Cranston. “But meanwhile his students are yawning, seeing him as a dinosaur, completely useless to them. This man is professionally and literally impotent.”

Worse, his teenage son seems to look up more to his blustering brother-in-law, Hank, a DEA agent. At a party RJ Mitte, as Walt Jr., hands Uncle Hank’s Glock to his dad. “It’s heavy” is all Walt can muster. “That’s why they hire men,” says Hank, to the laughter of his friends. (Dean Norris, who plays Hank, thought the show was to be a comedy when he first read the script.)

During the ride-along with Hank that will introduce him to the world of meth, Walt sits in the backseat wearing a seat belt over a white bulletproof vest, looking like a child in a life preserver. Soon after, he chooses to cook drugs to support his family. “I am awake,” he declares, the decision made. Who among us would deny him, or ourselves, that feeling of elation, of suddenly stepping into our bodies fully alive? Who would give it up? Posing that question so passionately may be the true innovation of Breaking Bad.