Home Uncategorized Checking In On and Checking Off To-Dos For Eric Garcetti On Day... 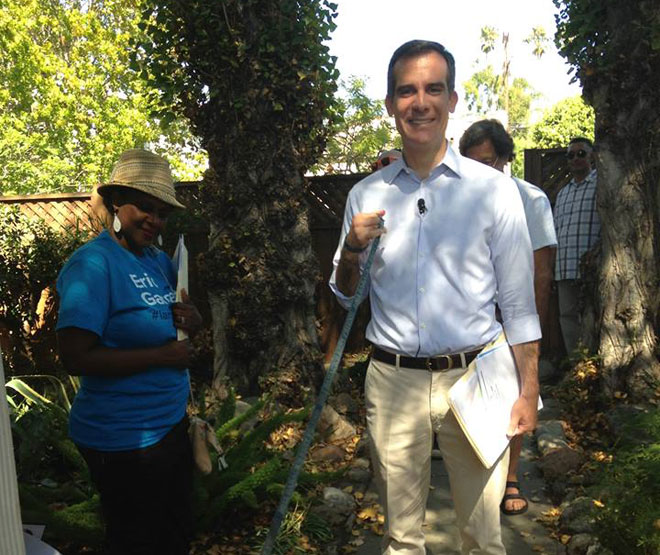 Mayor Eric Garcetti on a recent walk through Venice

Back in July, we offered to help prioritize new mayor Eric Garcetti’s to-do list. Scoring a flattering profile in the New York Times wasn’t on the agenda, but it’s something Garcetti can put on his resume—and before his 100th day in office, no less.

Mr. Garcetti “is the youngest mayor ever elected to lead this city of four million, and his tastes, too, are a signal of new changes,” cooed the paper yesterday.

He’s got fans at home, too. While a new poll conducted by Pat Brown Institute/Cal State L.A. found local voters haven’t formed a strong opinion on Garcetti yet, 56% of responders approved of the way he has handled his job and only 11 % disapproved (the remainder of survey takers couldn’t decide).

Getting the public’s approval—and showing government results—is a task Garcetti is committed to (in the past two hours, he’s personaly responded via Twitter to three citizens with comments or concerns). That why he’s offering the media a sneak peek at the beta version of his new “performance metrics website” today, day 100 of his term. The site is designed to answer the FAQs of L.A. life—things like, How long does it take to get a pothole filled? According to the Times, general managers from approximately three-dozen city agencies were involved in the site’s creation, so it represents a full city government effort.

While his staff gets the online system up and running, Garcetti can put another check mark next to one of the items we suggested this summer: Don’t quit the piano. As we explained back then, Garcetti’s talents makes him likeable. Given the fact that the New York Times used his recent keyboard-playing cameo at a Moby concert to close out their piece, we’d say we nailed that one on the head. Now will you take our idea for free waffles seriously, Mr. Mayor?