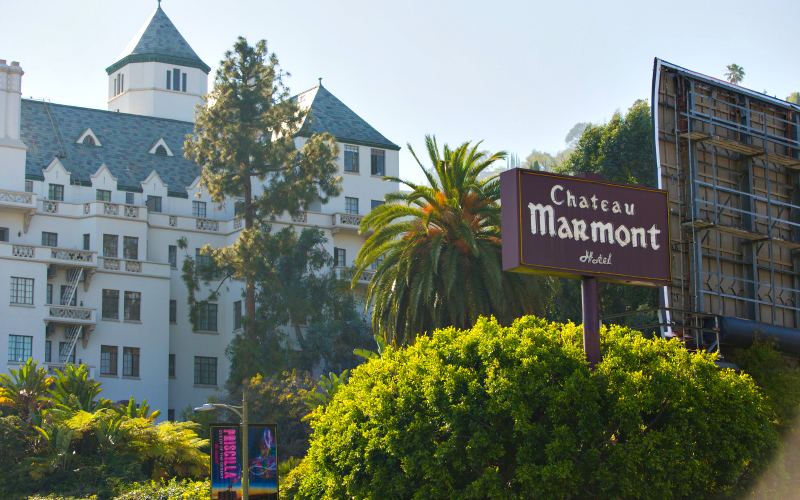 Chateau Marmont owner André Balazs has announced his plan for the embattled property’s post-pandemic future. He intends to turn the hotel into a private club, requiring annual dues from a select circle of members, The Wall Street Journal reports. If that works out for him, he’s hinted that he may attempt to expand the model to other cities around the world.

Balazs believes that in the era of coronavirus his clientele will feel more comfortable with the idea of sharing the space with a pre-vetted group of like-minded people, rather than random members of the general public (even the limited segment of the public willing to part with upwards of $400 a night).

“There is something to be said for knowing people,” Balazs told the Journal. “You can chat with them; you know where they have been.”

Since reopening when local hotels were allowed to do so, Chateau Marmont has operated on a semi-private basis anyway, he claims. Occupants of the rooms have had to call up the hotel directly to make a booking, and they’ve opted for fewer, longer-term residents, rather than the typical tourist churn of the pre-COVID days. It’s unclear how many guests have been sheltering at the Chateau, but representatives confirm that a number of would-be visitors have been turned away in the interest of maintaining safety.

If he’s able to attract enough members, Balazs says he hopes to open clubs in Singapore, London, Milan, Paris, and Tokyo. The south of France and a private island in Greece are on his list as well. He might even look into flipping his other hotel properties, which include the Mercer in New York City and Chiltern Firehouse in London, to the model.

Unlike a traditional membership at a club, however, a spokesperson for André Balazs Properties tells Los Angeles that it will be more of a timeshare style arrangement. Presented as an alternative to owning multiple houses in different cities, members will own equity in a global real estate portfolio. If they decide to opt out, they can sell their shares back to management or to another buyer.

The Chateau’s restaurant is expected to continue accepting dinner reservations from non-members, for those who still want a glimpse of the historic establishment.

According to the Journal, he hatched a plan to open a private club once before, in partnership with entertainment executive Barry Diller, but the economic crisis of 2008 sidelined that project.

Hundreds of workers were laid off by Chateau Marmont in March, and even as the hotel continues to operate, few have seen their jobs come back. As recently as July 23, laid-off workers and their allies were demonstrating outside the hotel, protesting how Balazs and his team handled their termination. One worker at the protest told the Beverly Hills Courier that he’d worked at the hotel for 23 years before being axed and having his health insurance canceled amid a public health crisis.

L.A. City Councilman David Ryu, who represents the area, wrote a letter directly to Balazs in June, imploring him to extend the same health benefits to his workers that other nearby hotels, including the Andaz West Hollywood and 1 Hotel West Hollywood offered. A spokesperson for Balazs has stated that the lack of severance pay or benefits was “consistent with other nonunion properties.”

While Chateau Marmont created a $250,000 fund for the impacted workers ($100,000 from Balazs, the majority donated by guests and supporters)–offering one-time payments of $350 to $5,000 to former staff–that did little to help some struggling ex-employees.

Martha Mora, who worked as a Chateau Marmont housekeeper for 33 years until the March layoffs, is a single mother of three, is diabetic, and requires medical attention. “I don’t know what I’d do if someone else in the family got sick,” she told The Daily News.

But, despite the protests, Balazs tells the Journal he does not intend to hire back many of workers, even if the private club model is successful. Instead, he says, he wants “fewer staff and a different skill set,” for the new business.

A spokesperson for Chateau Marmont confirmed to Los Angeles that the company intended to comply with local Right of Recall and Worker Retention Ordinances, requiring hospitality businesses to rehire from the pool of former workers if possible.

“If there is opportunity to train former staff members and rehire them, the Chateau would do that as a matter of priority,” the spokesperson stated.

Balazs has been accused of sexual misconduct by multiple women, including at least one former Chateau Marmont employee. The New York Times detailed stories of several of the accusers in 2017. He resigned his position with Standard International, a hotel chain he launched with the Standard West Hollywood in 1999, but retained control of André Balazs Properties.