Home Sports Chargers and Raiders Set Aside Their Rivalry to Propose a Bonkers NFL... 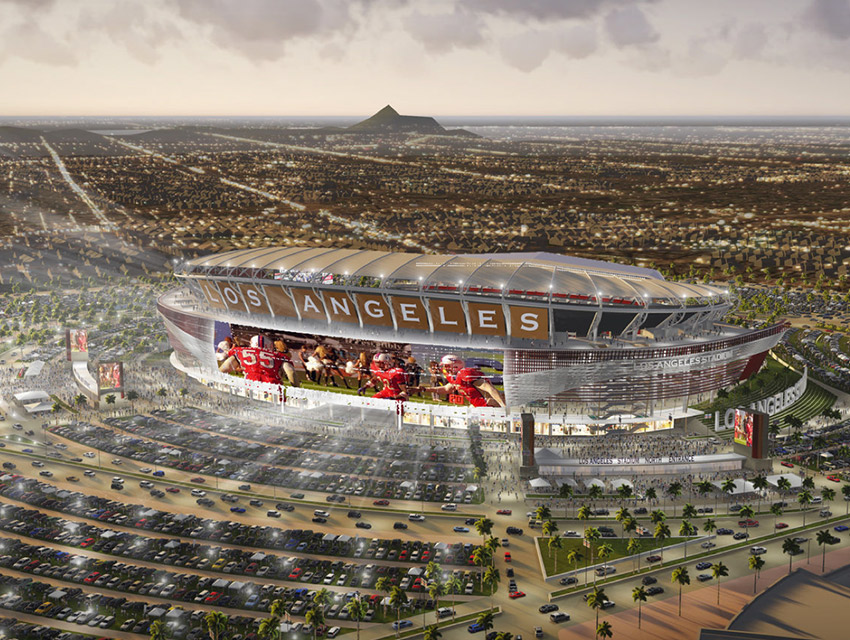 The old adage goes, “fool me once, shame on you. Fool me twice, shame on me.” But who’ll be to blame when the naïve, football-deprived dreamers of L.A. allow themselves to be fooled thrice? Probably the NFL.

All this talk of chicanery refers, of course, to the newest and most outrageous NFL stadium proposal we have seen yet, one even less likely to come to fruition than AEG’s as-yet-unsown Farmers Field downtown and the oafishly named “Grand Crossing” project in the City of Industry. Yesterday the San Diego Chargers and the Oakland Raiders outlined a pipe dream proposal for a joint-use stadium to be built in Carson along the 405, which is projected to run up a bill of $1.7 billion. Like, with a B.

Should the thing manage to get the green light, it will be the most expensive stadium in the history of the NFL—according to the Los Angeles Times, the stadium is set to be privately funded by Goldman Sachs. The firm will profit from “revenues generated by the stadium,” according to director for municipal finance Tim Romer.

Despite their rivalry on the field, the Raiders and the Chargers can relate when it comes to stadium issues in their own cities. In a joint statement (so much teamwork!), the Raiders and Chargers said, “We are pursuing this stadium option in Carson for one straightforward reason: If we cannot find a permanent solution in our home markets, we have no alternative but to preserve other options to guarantee the future economic viability of our franchises.”