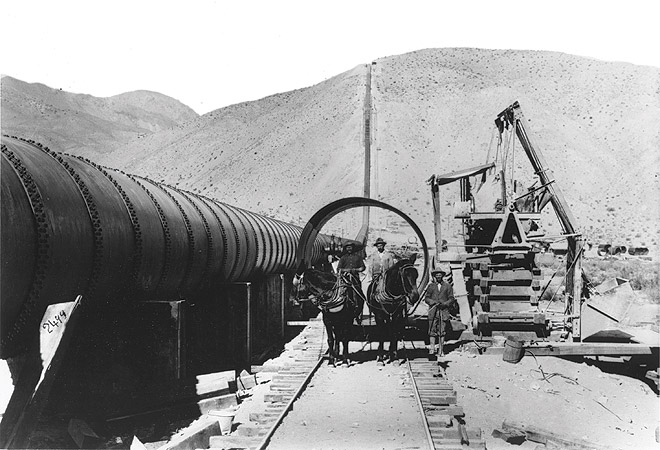 The Los Angeles Aqueduct under construction in the early 1900s. Photograph courtesy LADWP

The Los Angeles Aqueduct, which marks its 100th anniversary on Tuesday, November 5th, transformed the city. Built between 1907 and 1913, the aqueduct fueled L.A.’s explosive growth and, by providing a cheap source of hydroelectric power, attracted industry to Southern California. Without that 233-mile pipeline draining the Owens Valley, L.A. wouldn’t have theSan Fernando Valley—or Roman Polanski’s Chinatown. It still supplies Los Angeles with a third of its water, but it’s just one of a handful of public works projects that significantly affected the region. Here are four more:

1781: Zanja Madre
Before the Owens Valley aqueduct, another waterway sustained the city’s growth. Soon after founding the pueblo in 1781, the town’s 44 original settlers dammed the Los Angeles River with sand and willow poles and dug a two-mile open trench, the zanja madre, to irrigate their fields. It would supply the area with water for more than a century.

1899: San Pedro Bay Harbor
Unlike San Diego and San Francisco, Los Angeles lacks a natural harbor. But that hasn’t stopped the city from becoming a global shipping center. Where topography failed to shelter ships from the wind and sea, L.A. began building breakwaters in 1899. Today the equivalent of 14 million shipping containers pass through the twin ports of Los Angeles and Long Beach every year—more than through any other U.S. harbor.

1953: Four-Level Interchange
Superhighways were nothing new when downtown’s Four-Level Interchange opened in 1953, but the structure’s grand scale—22 lanes and seven bridges—announced the dawn of the freeway age in Los Angeles. Built at the convergence of the 101 and the 110 freeways, the Four-Level gets its name from its stacked design: two levels of ramps and two levels of lanes for through-traffic. That’s progress, even if it doesn’t always move.

1993: Red Line Subway
Transportation planners have realized the need for a rapid transit system since 1925. But after the city dismantled its aging trolley network in the 1950s and ’60s, one rapid transit proposal after another failed at the ballot box. Finally the 1993 opening of Metro’s Red Line subway heralded the city’s commitment to a multimodal future—one that will include a Purple Line subway to the Westside by 2035.