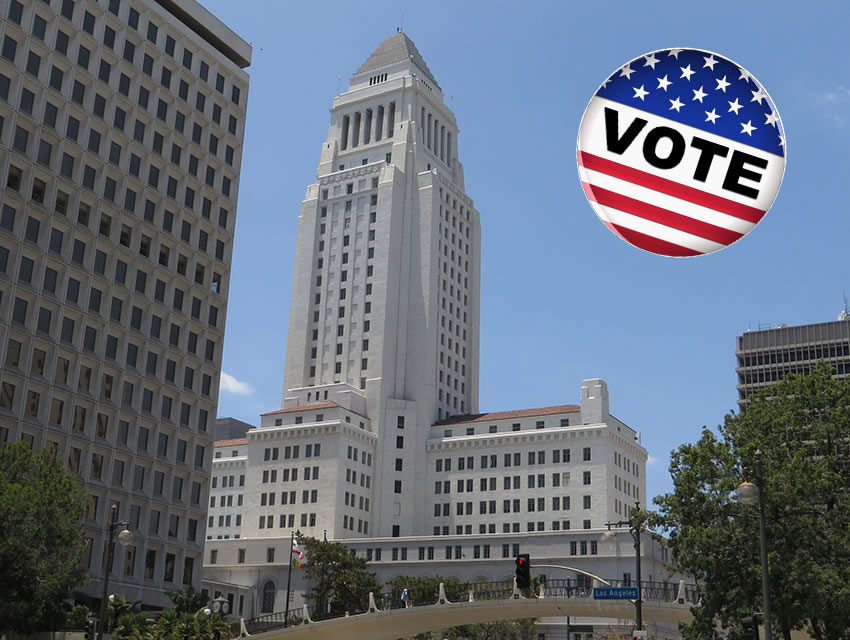 The challenger: Eric Preven (running against city councilman Paul Krekorian)
Occupation: Independent television producer
Political priority: The coffers of Los Angeles. Preven is hoping to use skills garnered during his time as a budget specialist in the Industry to ensure that the city’s money is being put to good—and proper—use. “I want to represent the constituents and not the developers,” he has said. “We shouldn’t have to wait so long for basic services such as filling potholes and fixing sidewalks.”
Campaign highlight: Nothing like a backhanded compliment—the Times may have endorsed Krekorian, but they also said that Preven would be the candidate most likely to “shake up” City Hall.
Random factoid: He lives in the R.M. Schindler-designed “Gold House.” The challenger: Cindy Montanez (running against city councilwoman Nury Martinez)
Occupation: Board member of the UCLA Institute of the Environment and Sustainability
Political priority: Fighting special interests. She’ll focus on clearing the trash in Valley neighborhoods and combating DWP rate increases
Supporters of note: The Los Angeles Times
Random factoid: Montanez and Martinez ran against each other 18 months ago: In 2013, it was Montanez who had the support of City Hall, Eric Garcetti, Herb Wesson, and the Democratic party, yet she lost to Martinez in a surprising midsummer runoff. Now Montanez is the dark horse in the race.

Smith
Occupation: Physician
Political priority: He has accused the DWP of piping reclaimed sewer water into taps in South L.A., and he’d like that to stop. Unfortunately, there’s not much additional information about Smith available. Yoo
Occupation: Attorney and former executive director of the Korean American Coalition
Political priority: “Building bridges between different cultures and communities”
Supporters of note: Councilman Bernard Parks, LAUSD Board Member Monica Ratliff, and Supervisor Michael D. Antonovich
Campaign highlight: The real highlight of Yoo’s political work came when, as a community leader, she opposed how redistricting split Koreatown into several districts. But that was back in 2012. O’Neill
Occupation: Community Political Consultant
Political priority: Building 100,000 new affordable housing units (by 2012). Via email, he told the Occidental Weekly that “over a third of renters in L.A. spend more than half of their income on rent…L.A. has become the most crowded, least affordable place to live in America, and for the last decade it seems like city hall has simply been ignoring the issue.”
Random factoid: Although his campaign Web site lists a Twitter account, O’Neill has yet to Tweet from it. Like the District 13 field all of the candidates running for this seat are new. City Councilman Bernard Parks has been termed-out of office. Although they are not “challengers” by definition, these candidates are of course worth knowing before election day, too.