Home Architecture A Historic Hotel Is the Centerpiece of a Major Makeover in Century... 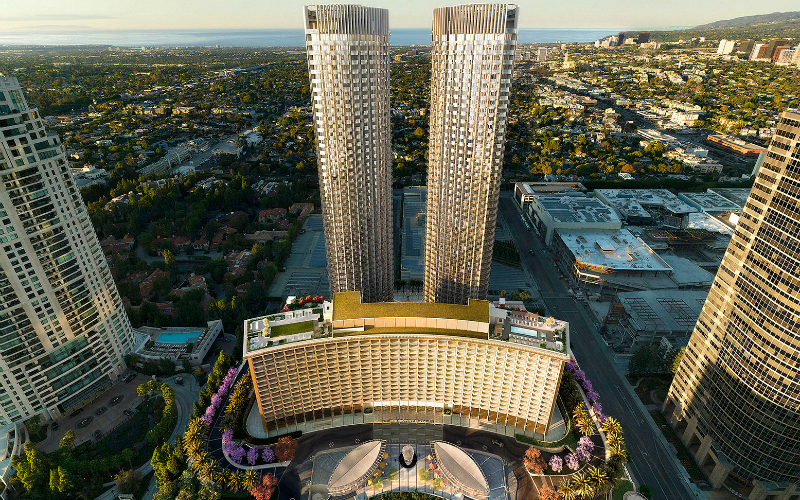 Closed for nearly two years, one of the city’s most iconic hotels is the centerpiece of a $2.5 billion plan to bring condominiums, high-end shopping, and two acres of open space and gardens to Century City. When it opens in 2018, the New Formalist-style Fairmont Century Plaza Hotel—the arcing 1966 landmark that Minoru Yamasaki designed on the former 20th Century Fox back lot —will be operated by Fairmont Hotels and feature 394 guest rooms along with 63 condominiums.

Behind it, a pair of oval towers with another 268 residences are supposed to be completed in late 2019. At 45 stories, they’ll be about as tall as the triangular Century Plaza Towers nearby and offer full access to hotel services, from maids and room service to game rooms and a wine cellar. By the time they’re open, outdoor cafés along with parks and plazas should be up and running.

“Century City was originally built in a large superblock format for people coming in from the suburbs,” says the project’s developer, Michael Rosenfeld, who has made a name breathing life into vintage hotels like San Francisco’s InterContinental Mark Hopkins. “You’ll see a tremendous activation as it evolves into a very walkable destination with shopping and nightlife.”

The development joins the Robert A.M. Stern-designed Century Tower that opened in 2010, the 40-story Ten Thousand tower that debuted on the edge of Century City last year, and the billion-dollar makeover of the Westfield Century City mall that was recently unveiled. In 2024, a Purple Line stop should be open adjacent to the hotel, too. By then you may actually make it to the front of the line at Eataly.