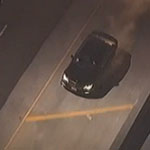 Back in February 2003, Los Angeles magazine editor-in-chief Mary Melton called L.A. car chases a “nightly staple.” Ten years later, all that’s changed about the trend is the list of TV dramas being interrupted for breaking footage of drivers refusing to pull over. (We miss you, Matlock.) Now NBC has clipped together local coverage of the network’s most-watched chases—including a segment featuring a viewer’s home video of a chase zooming by his window, captured while he watched a report about it on the news. How’s that for reality TV?