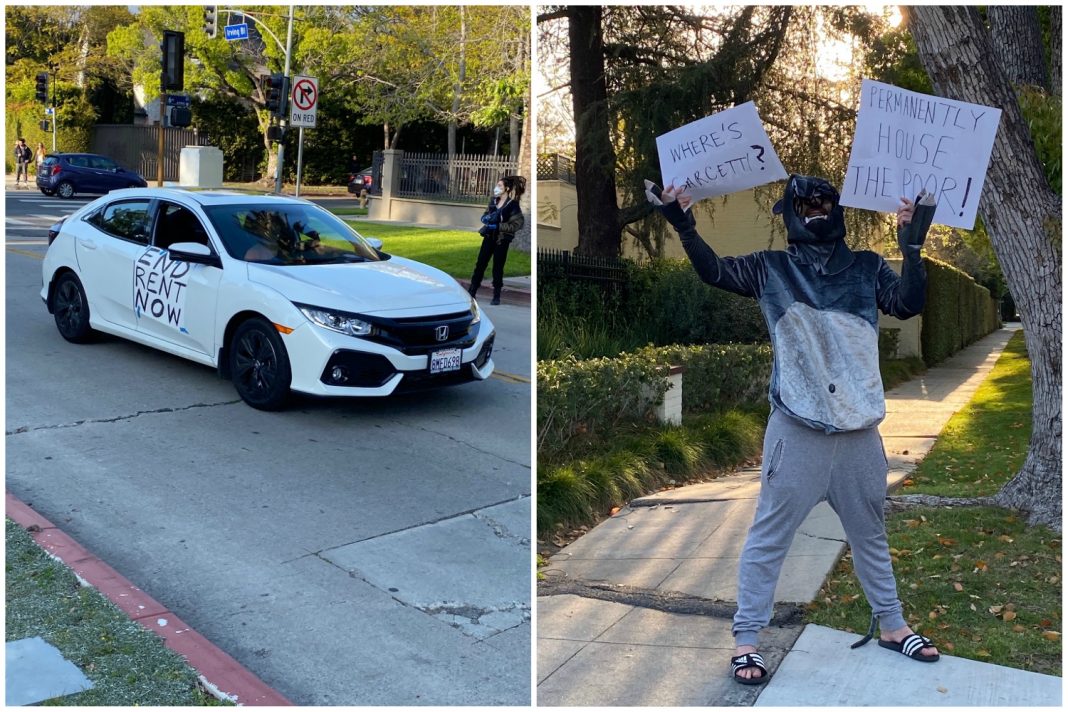 In the era of COVID-19, even protesters in Los Angeles are going the extra mile to practice social distancing. On Sunday evening, housing activists staged a “car-caravan” protest outside Mayor Eric Garcetti’s official residence in Windsor Square, in which they urged local officials to enact stronger protections for tenants and the unhoused amid the global coronavirus pandemic.

Circling the towering tudor estate in more than a dozen vehicles, several of which were adorned with protest signs, advocates blared their horns in unison and chanted “housing is a human right!” out of their car windows. Standing in front of the house, a lone pedestrian protestor dressed in a rat suit held signs that read “WHERE’S GARCETTI?” and “PERMANENTLY HOUSE THE POOR.”

The protestors, which included members of the Los Angeles Tenants Union, Chinatown Community for Equitable Development, NOlympics L.A., and other advocacy groups, say that the local government hasn’t done enough to protect the many tenants who have lost jobs and wages as a result of COVID-19, many of whom will struggle to pay rent come April 1.

They are calling on officials to enact a blanket eviction moratorium, to provide rent suspension or rent forgiveness measures, and to immediately use hotel and motel rooms to shelter unhoused residents.

Advocates fear that if these protections aren’t enacted, more Angelenos will wind up living in the streets. “Throughout his political career, L.A. Mayor Eric Garcetti has failed the millions of tenants in this city. Now, his tepid response to COVID-19 will leave countless families vulnerable to being thrown on the street by self-serving landlords during this historic crisis. The poor and people of color will suffer disproportionately,” the group said in a statement.

On March 15, Garcetti issued temporary order blocking evictions for those impacted by the novel coronavirus, and last Friday, the Los Angeles City Council expanded on his order by waiving late fees for nonpayment and granting impacted tenants a year to pay back missed rent. Neither of the measures absolves tenants from paying rent or prevents landlords from serving eviction notices. Instead, they give impacted tenants a way to defend themselves in court if eviction proceedings are initiated.

During a city council meeting on Friday that lasted for 11 hours, Venice Councilmember Mike Bonin argued that the city should instead enact a blanket eviction moratorium that would ban all evictions for 30 or 60 days. This, he said, would prevent impacted individuals from having to spend time and money going to court, where they would be required to defend themselves and provide proof that COVID-19 had caused their nonpayment.

“This is a tremendous hurdle for people to have to get through,” Bonin said. “People who are low-income, who are undocumented, or may be informal employees or self-employed or independent contractors…many of them do not have documentation to show.”

However, other councilmembers expressed concerns that a complete moratorium would prevent landlords from being able to evict for other reasons, like illegal activity. They also feared it would cut into the profits of smaller “mom-and-pop” building owners who need to pay for mortgages and other costs. “I think it’s concerning to leave it so broad,” said Councilwoman Monica Rodriguez. “I think we just lend ourselves for the potential of the foreclosures that may come from this.”

Ultimately, Bonin’s effort failed to pass by a single vote. At the council’s next meeting, members are expected to vote on a proposal to enact a citywide rent freeze, which would prevent landlords from increasing rent prices for the duration of the crisis.

On Sunday evening, Garcetti tweeted that 900 L.A. hotel and motel rooms will be used to quarantine homeless individuals who’ve been exposed to COVID-19, and that more rooms will be added to accommodate “medically asymptomatic unhoused people.”

900+ motel/hotel rooms will be used for isolation & quarantine for homeless Angelenos who have had exposure to COVID-19, or waiting for test results. We're also adding rooms for medically asymptomatic unhoused people.

Motels/hotels can step up and help
→ https://t.co/JysvlJX7jc