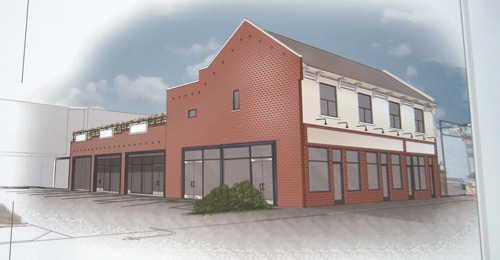 In 1921, Canadian pharmacist Charles See moved to Los Angeles and started making candy. He moved into a brand new Italianate building on bustling Western Avenue just south of Beverly. His See’s Candy shops were wildly successful and expanded rapidly. The factory eventually moved downtown and then to a modern building on South La Cienega in 1946. That original candy kitchen and store #1 was sitting empty and about to become part of a postmodern mini-mall when the city of LA declared it a Historic-Cultural Monument in June.  This week, owners, architect, neighbors and See’s Vice President Richard Van Doren had a meeting at the site to discuss See’s as a potential tenant in a restored See’s building. The St. Andrews Square neighborhood group has been leading the charge to bring candy back into their neighborhood. For more info contact: [email protected]