Home Uncategorized Can the magic of Pixar—and a billion-dollar renovation—get Disney California Adventure off... 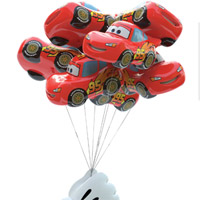 When Disneyland opened in 1955, it was a reflection of the genius of Walt, with every detail painstakingly planned. When Disney California Adventure opened nearly a half-century later, it was a reflection of the greed of Michael Eisner, and the theme park was widely dismissed by critics and crowds as a money grab with none of Mickey’s mojo. ¶ Not anymore. Five years, one Pixar visionary, and an estimated $1.1 billion later, California Adventure reboots June 15 with an additional 12 acres on its 55-acre plot. To further fuel the hype, the centerpiece will be Cars Land, based on the hit animated movie franchise.

The mastermind who brought Lightning McQueen’s ka-chow! to Anaheim was John Lasseter. The Pixar honcho directed both Cars films and took on the role of principal creative adviser at Walt Disney Imagineering in 2006. He had designers re-create a real-life Radiator Springs, complete with a mock Route 66 and a kid-friendly racetrack. “We weren’t just building brick-and-mortar,” says Jim Kearns, vice president of project management for Imagineering. “We were participating in the creation of a new story product.”

Lasseter is trying to ensure that the park is no longer considered Disneyland’s ugly stepsister and is building on the Disney-Pixar brand rather than on the generic rides that previously plagued the park. Along with Cars Land, the park features the animatronic Little Mermaid Undersea Adventure, A Bugs Land, and a water show called World of Color. Park planners also moved the grand entrance to Buena Vista Street, taking its name from the location of Walt Disney Studios in Burbank.

This homage area includes a contemporary clone of the Carthay Circle Theatre, the site of the 1937 world premiere of Snow White and the Seven Dwarfs. Back then, the film’s debut received a standing ovation. Perhaps this unveiling will bring the crowds to their feet and inside the park.

This time-lapse video shows the construction of Cars Land at Disney California Adventure: