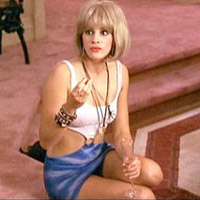 Among the various propositions and candidates locals will have the chance to vote for and against on November 6 is a health issue that hits close to well, down there, for adult film professionals. If it passes, Measure B will require porn actors to wear condoms while filming. Intended to protect the sexual health of performers, it has been denounced by stars like Ron Jeremy and Tera Patrick, who argue in the PSA below that mandating the use of condoms will drive adult productions to take their business—a “$20 billion industry” —elsewhere (apparently no one’s thinking about product placement opportunities). Patrick and Jeremy say they oppose the measure because enforced health screenings already keep actors and actresses safe and STD infection rates low. If we had to guess, we’d say there’s a second reason they chafe at the idea: it’s hard to make putting a condom on look sexy. Some might say impossible. But we have evidence to the contrary. Behold this excerpt from the script for half the world’s favorite movie, Pretty Woman, in which Julia Robert’s Vivian makes picking a condom look like shopping for candy (and who doesn’t like candy?):

Vivian: All right. Here we go. Pick one. I got red, I got green, I got yellow. I’m out of purple, but I do have one gold circle coin left. The condom of champions. The one and only. Nothing is gettin’ through this sucker.

Vivian: A buffet of safety. I’m a safety girl.

We all know what happens next—not to mention the off-screen part where Roberts and Gere went on to become two of the biggest stars in Hollywood. Pretty Woman may not be pornography, but since the story’s romantic relationship begins with an act of prostitution, we think the parallel holds up. Still prefer your X-rated pleasures stay condom free? Vote no on B. Just remember: Julia Roberts made working with a wrapper work.