Home Politics Campaign Trailin’: Garcetti and Greuel Do The Walk and Talk 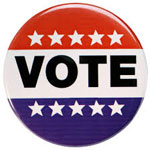 Days after Eric Garcetti and Wendy Greuel went head to head in their first post-primary debate last week, the mayoral candidates found themselves covering the same ground over the weekend, giving talks at separate get-out-the-vote events in Boyle Heights on Saturday.

Today, Greuel released the first TV ad (below) to run since March 5—a 30-second spot that focuses on gun control and calls for “more mental health services and a partnership with parents and police to keep guns and gangs out of schools.”

Meanwhile, Garcetti faced questions about how his campaign has affected his duties as a city councilman. He’s missed ten of the last 12 city council meetings according to the Los Angeles Times, although the absences have been excused by City Council President Herb Wesson (a Garcetti supporter).

The race for campaign funds remains tight. Reports released Friday reveal Garcetti has raised $1.27 million since March 5, while Greuel has raised $1.12 in that time. Both have received $800,000 in matching funds.

Up next: The opponents are scheduled to meet for another debate this week.