Home Uncategorized How to Call Your Senators and Representatives to Speak Out Against the... 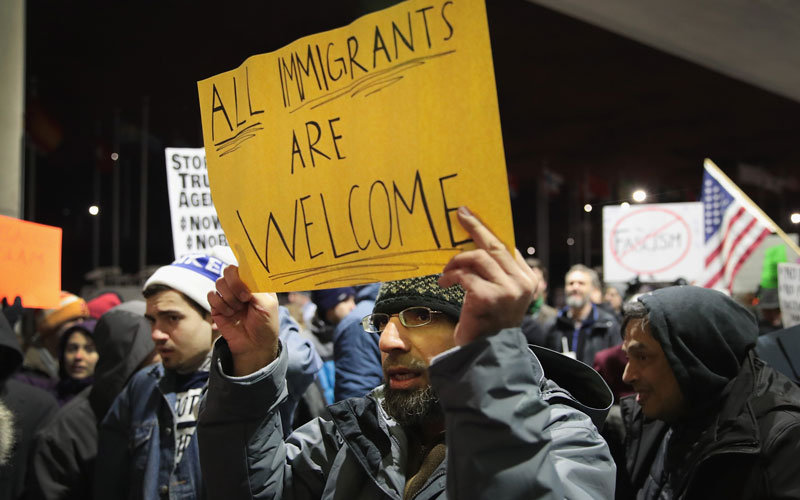 Not down with Donald Trump blocking refugees from entering our nation? One of the most effective ways to voice your opposition to the ban—in addition to protesting at the airport—is to pester your senators and representatives with calls.

Doing so has a real effect. Staffers tally the calls they receive about certain topics and relay any major spikes in public opinion up the chain of command. Focus on your congressperson’s local office—you’ll have better luck reaching someone there, and your call will be more effective. If enough people call with the same concern, the local office will get the D.C. office on the line to discuss.

Start with your senators:

In short, when a staffer answers the phone, tell them your name, where you live, and the name of the senator you’re calling. Be prepared with specifics. Tell the staffer that you’re concerned about the president’s decision to ban refugees and citizens from seven Muslim countries from entering the United States.

When you call, know that both senators have vocally decried the ban, and on Monday, Feinstein introduced two bills opposing it. Mention that you appreciate Harris and Feinstein’s work and want to see their continued vocal opposition to the bill. Beyond that—according to the Indivisible Guide, a resource for resisting Trump—you might consider asking your senator to withhold consent on Senate business until the ban is lifted. Here’s an example script you can use for that, adapted from the Indivisible Guide:

You: Hi, my name is _______. I’m calling about President Trump’s Executive Order to halt refugee admissions and ban citizens from several Muslim countries from entering the U.S.

Staffer: Thank you for calling! Senator _______ opposes this Executive Order.

You: Good. I’m calling to say that if Senator _______ truly believes, as I do, that this is a national crisis and a threat to fundamental American values, then he needs to take action to stop it. That means committing to withhold consent on Senate business, including scheduling votes on nominees, until the ban has been lifted, and committing to filibuster any bill that comes to the floor UNLESS it’s a bill dedicated to ending this ban. Will he commit to do this?

Staffer: Senator _______ hasn’t taken a position on procedural issues. But he has made a strong statement objecting to the Executive Order.

You: That’s great, but it’s not enough to oppose it. Senator _______ needs to use every tool in his power to stop it. Will he commit to withhold consent on Senate business and use the filibuster to stop other legislation if necessary?

You: There’s no reason that the Senate should be conducting business as usual when Trump is blatantly violating the constitution and families are being ripped apart. I expect Senator _______ to act to uphold our values by taking every step he can to stop this Executive Order.

NOTE: Some staffers may ask you to explain what “withholding consent” means. Tell them this: For Senate business to proceed normally, Senate leadership relies on universal agreement by Senators to move forward on procedural matters. This is called universal consent. If any individual Senator withholds consent, it triggers a delay as the leadership has to initiate a time-consuming process in order to move forward. This means that business in the Senate slows down significantly and it will greatly hamper Trump’s ability to move forward on any other legislative priorities.

Next, move on to your representative. To find the phone number of your district’s representative (California has 53), enter your ZIP code here. When you call, you can use the below template, adapted from Muslim Matters:

Hi, my name is _______ and I’m a constituent of Representative_______. I’m calling because I’m concerned about President Donald Trump signing an executive order restricting immigration from Muslim majority countries and ending the Syrian refugee resettlement program. This executive order goes against our shared American values of religious tolerance, diversity, and nondiscrimination.

[If there are any questions, reiterate your concerns.] Yes, please express to Representative _______ that Trump’s executive order doesn’t represent our values, and that I am asking him/her to take a principled, public stand against this kind of intolerance.

And just a heads up for anyone living in the 34th district (which includes downtown, Koreatown, Boyle Heights, Eagle Rock, and Highland Park): Your representative was Xavier Becerra, but he just got appointed State Attorney General. The vacancy he left behind has yet to be filled, so there’s no point in calling his office. Stick with your senators for now.

Thomas Harlander is a staff writer at Los Angeles magazine. You can follow him on Twitter and Instagram. He recently wrote: There’s a Trump Tax Returns March Happening in April, and It’s Going to Be Huge