Home L.A. History These California Women Were Warned, Given an Explanation, and Persisted 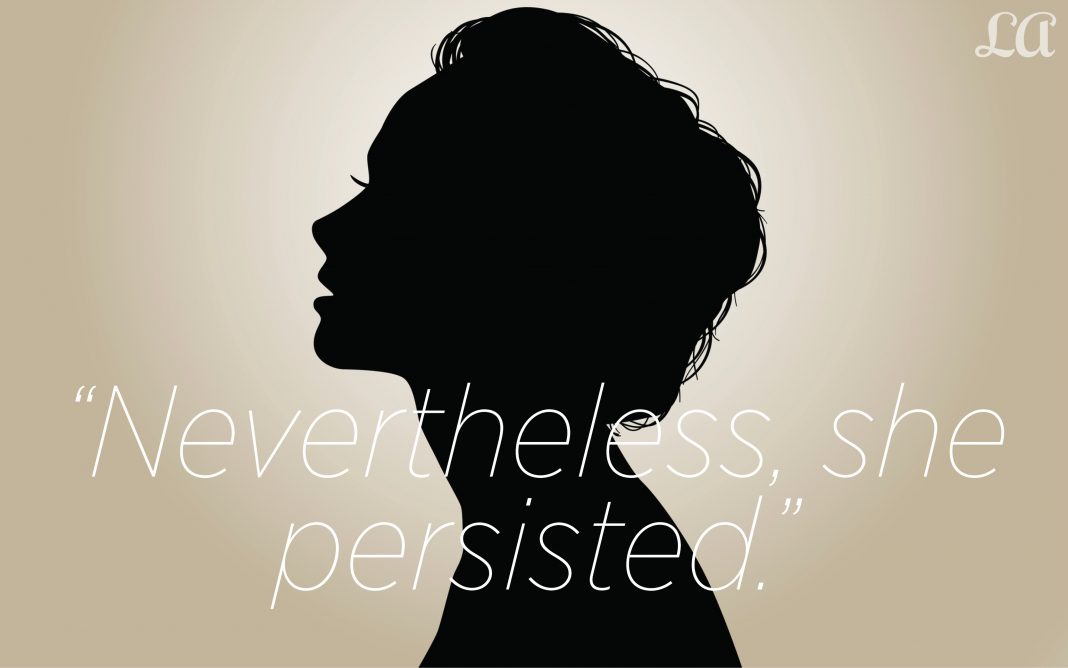 Oh, Mitch. There’s no way Senate majority leader Mitch McConnell could have envisioned his remarks about Senator Elizabeth Warren— “She was warned. She was given an explanation. Nevertheless, she persisted,”—would have become the rallying call of the day. But, boy have they.

His words, invoking a rarely used rule to silence Warren (who was reading a letter by Coretta Scott King on the Senate floor yesterday), struck a chord with many women. Women tired of being silenced, of being told when they can speak.

Soon after, #LetLizSpeak and #ShePersisted started trending, as women on social media expressed frustration about how common the sentiment was (though, perhaps, rarely so pithily expressed) and began highlighting other trailblazers who didn’t sit down and shut up.

“[Warren] was warned. She was given an explanation. Nevertheless, she persisted,” said @SenateMajLdr, providing a history of feminism.

Of course, Warren’s part of a long line of women who, despite being silenced, have continued to push for equality and justice. Here are some of our favorite heroes, in no specific order:

CALL TO ACTION! I know we are all busy but take 5 mins to call your reps to say no to the senate’s pending vote today to approve Rex Tillerson as Secretary of State. Tell your senators to REJECT Rex. California call @ 855-636-8150 or 202-224-4751. Say No to Bannon, no to sessions, no to Muslim ban, no to keystone and Dakota access pipeline, the list goes on!!! If it’s busy or mailbox is full call back you will get thru. #huelga #resist #powertothepeople #dailyprotest #deleteuber #doloreshuerta

In addition to staring on I Love Lucy, she was the first-ever female head of a major studio.

Davis is an activist, scholar, author and professor, known for her involvement in the Civil Rights Movement, Black Panther Party, and Communist Party.

#WCW Educator and activist Angela Davis became known for her involvement in a politically charged murder case in the early 1970s. She emerged as a prominent counterculture activist and radical in the 1960s as a leader of the Communist Party USA, and had close relations with the Black Panther Party through her involvement in the Civil Rights Movement. Her interests include prisoner rights; she co-founded Critical Resistance, an organization working to abolish the prison-industrial complex. She was a professor (now retired) at the University of California, Santa Cruz, in its History of Consciousness Department and a former director of the university’s Feminist Studies department. #blackhistorymonth #angeladavis

Head of the California Community Foundation and attorney. She represented ten Latinas who were sterilized without informed consent in the landmark reproductive justice case Madrigal v. Quilligan.

Ride was the first American woman in space and an advocate for women and girls.

Castillo was an environmental activist and cofounded Mothers of East Los Angeles.

Golden Age film director. During the 1930s, she was the only female director working in Hollywood.

Before becoming the junior Senator from California, Harris was the first woman to serve as California’s Attorney General.

Today I was sworn-in as Senator. I’m humbled and honored to serve you and the people of California in the U.S. Senate. Let’s all roll up our sleeves, get to work, and fight for the future of our country.

As the first black librarian in Los Angeles, Matthews preserved a massive and important collection of black history for the city.

The Pasadena native was one of the greatest women in science fiction, and was the first sci-fi writer to receive the MacArthur Fellowship Genius Grant. She’s most famous for Kindred.

@Regrann from @dwattswords – 4/28 #BlackWomenStorytellers #OctaviaButler was a science fiction novelist and the first to be nominated for the @macarthurfellows (aka the “Genius Grant”) in her field. She is most known for her “Patternist” and “Parable” Series. She was disenchanted by science fiction’s lack of imagination when it came to ethnicity and class and set to “write herself in” thus creating stories from a marginalized Black woman’s perspective, a shift from the norm, giving HER the opportunity to shape the future of her society. “Who am I? I am a forty-seven-year-old writer who can remember being a ten-year-old writer and who expects someday to be an eighty-year-old writer. I am also comfortably asocial—a hermit…. A pessimist if I’m not careful, a feminist, a Black, a former Baptist, an oil-and-water combination of ambition, laziness, insecurity, certainty, and drive.” #BlackHistoryMonth #BHM #BlackGirlMagic #BlackHistoryEveryday – #regrann

She was a Tongva shaman who fought colonialism by leading a revolt against the San Gabriel Mission of 1785.

Honoring our ancestors and sheroes. #wcw

Burke was the first African American woman elected to the CA Assembly in 1966.

Wyman was the youngest person (and second woman) elected to the L.A. City Council. She’s also credited with bringing the Dodgers to Los Angeles.

She wrote law that allowed women to become lawyers in CA and then became the first woman to pass the state bar.

Bass was a newspaper editor who started the Home Protective Association to fight racist housing covenants.

This Black History Month, get familiar with Charlotta Bass (1874-1969), an editor, educator, and activist. Bass was born in South Carolina and was the 6th of 11 children. After working for the Providence Watchman newspaper, she moved to California and published the California Eagle from 1912 until 1951, the largest black newspaper on the West Coast. Along with her husband, Bass tackled issues of sociopolitical injustices across race and ethnicity in the newspaper. Bass also worked for the UNIA and NAACP, and became the first black woman nominated for Vice President in 1952 under the Progressive Party. #blackhistory #blackhistorymonth #getfamiliar #charlottabass #blackwomen

Spencer was the first female black federal judge in California.

THANK YOU @ATLANTABLACKSTAR. EVERYDAY IS #BLACKHISTORY. California’s first Black female judge and one of the longest serving jurists in state history passed away Tuesday at the age of 96, the Associated Press reports. #VainoSpencer died of natural causes in her sleep at her Los Angeles home Oct. 25, according to her niece, Fatimah Gilliam. Spencer was born in Los Angeles July 22, 1920 and graduated from Polytechnic High School in 1938. The Root reports that she went on to earn her associate’s degree from Los Angeles City College in 1949 and then a bachelor of law degree from Southwestern School of Law in 1952. #theurbanleak #blacklivesmatter #blackisbeautiful