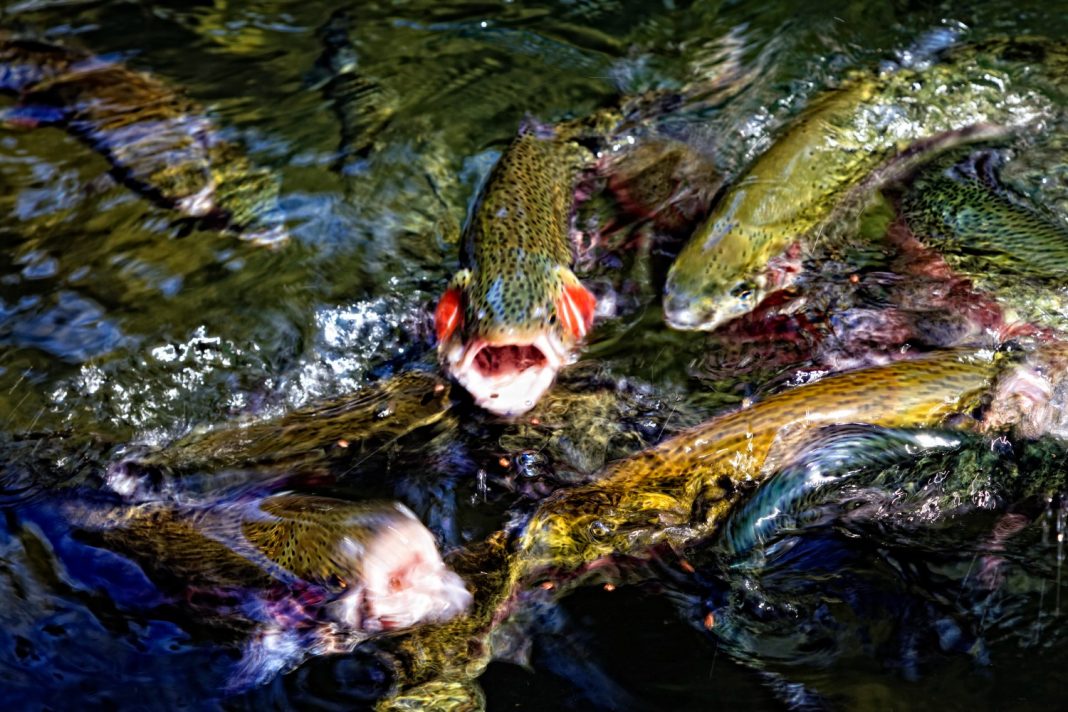 The California Department of Fish and Wildlife (CDFW) has announced its decision to euthanize approximately 350,000 rainbow trout that are showing signs of disease caused by an outbreak of bacteria.

The two affected hatcheries—Black Rock and Fish Springs—are located on the eastern flanks of the Sierra Nevada range and produce trout for stocking nearby waters for anglers. The decision to euthanize the fish will certainly affect the summer fishing season but CDFW has stated their intent to work with other partners to provide suitable stock.

“This loss is a huge disappointment, but we were prepared for this possibility and are doing all we can to ensure continued angling opportunity for the public,” CDFW Fisheries Supervisor Russel Black said in the release.

The pathogen responsible for the outbreak, L. petauri, is a strain of Lactococcus spp. which was first reported at the two hatcheries in April. A different strain, L. garvieae, caused another major outbreak at the same two hatcheries in 2020. In that outbreak, 3.2 million fish were euthanized.

“The decision to euthanize animals is not a decision we take lightly at CDFW,” Kenneth Kundargi, an Environmental Program Manager at the CDFW told LAMag. “We’ve got strict policies governing euthanasia of animals in our care. We will follow recommendations put forth by the American Veterinary Medical Association to assure that the procedure is going to be performed in the most humane way possible.”

The CDFW fish pathologists believe that the pathogen is being transmitted by birds. “The current strain of bacteria is identical to one found in fish farms in central Mexico,” a release stated at the time of the April outbreak. “Which lends support to the hypothesis that birds using the pacific flyway are the likely vector for the spread of the bacteria.”

Such outbreaks aren’t necessarily uncommon among fish hatcheries, Kundargi says, and “they only cause infection and disease when conditions such as elevated water temperatures or crowding stress tilt in their favor.” But the CDFW ranks this outbreak as “above average in level of concern” because the organism causing it was previously thought alien to the region.

“What is unusual about this outbreak is that this pathogen is new in California,” Kundargi says. “The bacteria is known to be present in the U.S. but to date has only been identified in a handful of aquaculture facilities. It had not been found in California, either in aquaculture facilities or in the wild, prior to its discovery in eastern Sierra fish hatcheries in late April 2020.”

Symptoms can include bulging eyes, lethargic or erratic swimming and increased mortality, but some fish can also be asymptomatic. The CDFW clarified that “fish-to-human transmission of this bacteria is rare and unlikely. As always, anglers should follow USDA recommendations on cooking fish to an internal temperature of 145 degrees F.”

For now, the only viable solution to prevent the outbreak has been a two-part vaccination program. “Further complicating the treatment of the fish is that the bacteria is resistant to most of the few antibiotics approved by the U.S. Food and Drug Administration,” Kundargi explained.

The importance of the second vaccine is underscored by the fact that the outbreak started “among fish that have already received one round of vaccination,” the CDFW said.

Kundargi has seen success when fish received both types of vaccines in the program.

“Fish at Mojave River Hatchery have received both the immersion and injection vaccine and have remained bacteria-free” he said, adding that “the fish that tested positive at Black Rock and Fish Springs hatcheries had only received the immersion vaccine. Staff attempted to administer the injection vaccine this winter, however, the cold weather caused difficulties with that process.”

The decision to euthanize hundreds of thousands of fish will surely affect the angling season, but CDFW says it hopes to announce an external partner for supplying fish in July.

If You Think You’re Middle Class in California, Chances Are You’re Wrong