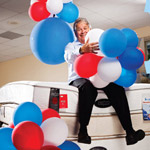 Larry Miller hears it all the time—from little kids, next-door neighbors, supermarket cashiers, and his own Sit ’n Sleep customers. Everybody, it seems, wants to mimic Irwin the accountant, with his New York whine:

In case you’re new to the area or haven’t owned a television or radio for the past dozen or so years, Irwin was a central character in the mattress chain’s commercials, the kvetchy bean counter who was horrified at how Miller kept marking down merchandise. The spots ended with Miller’s high-pitched promise that “Sit ’n Sleep will beat anyone’s advertised price or your mattress is freeee!” Their shtick, whatever you might think of it, has led to a 22-store empire (with 4 more being planned) and made Miller an iconic pitchman on the order of car dealer Cal Worthington and stereo king Crazy Eddie (“Our prices are insaaaane!”).

So why has Irwin been given his walking papers?

Miller, who talks a lot even off camera (he’s calmer in person than in his commercials), pauses when the subject comes up. It seems that Irwin has fans, and they’re not happy. “Our business topped out in 2007, 2008 saw a big sales reduction, and the first half of 2009 was going into the toilet,” Miller tells me at Sit ’n Sleep’s flagship store in Culver City. “I decided that we had to change the way we talk to people.”

Irwin was a victim of the recession, another example of how retailers who survived the downturn have been taking stock of their business practices. Much of the rethinking involves cost cutting—basic stuff like buying office supplies in bulk and getting a cheaper phone service. Miller and Nelson Bercier, his partner (and ex-brother-in-law), went so far as to ask their vendors—among them landlords, carpet cleaners, and gardeners—for a 10 percent price reduction over 18 months. “I told them I needed some help,” Miller says, and many of them agreed to the cuts. Better that than run the risk of going out of business.

Trimming expenses, however, did nothing to fill showrooms. As the economy tanked, replacing an old mattress wasn’t considered a priority. The real estate collapse meant more lost business—Sit ’n Sleep revenues fell from $99 million in 2006 to $79 million in 2008. The people who did buy were looking for deals: Industry-wide, the percentage of purchases that were less than $500 rose sharply, while the $500-to-$1,000 segment took a dive. “How do you make somebody think about buying something they don’t think they really need, and they don’t really want to buy during tough times?” asks Cary Sacks, who has been creating Sit ’n Sleep ads since 1998 and was the voice of Irwin. (Miller’s actual accountant is also named Irwin, but he sounds nothing like the way Sacks plays him in the commercials.)

If price alone wasn’t going to bring in people, what would? Sacks came across a statistic that provided part of the answer: After eight years, he read, the average mattress will double in weight from a combination of dead skin flakes, sweat, and the fecal matter of dust mites that accumulate inside the mattress cover. It’s a shaky claim—I spoke to several university professors who specialize in allergy and clinical immunology, and they question whether that stuff can weigh down a mattress all that much. They also say that unless someone has asthma or is prone to allergies, dust mites are not dangerous. (“We often end up worrying about things that aren’t worth worrying about,” says Ohio State professor Glen Needham.) Of course, dust mites do look disgusting when blown up in pictures, and the prospect of them crawling under your sheets is marketing manna. The new advertising approach would be more informational and not as goofy. Instead of Larry the rap star or Larry’s face on Mount Rushmore—two of the chain’s earlier commercials—the focus would be on a less antic Larry talking about the potential risks of old mite-infested mattresses.

“Poor sleep can affect my weight?” a woman asks Miller in one spot.

“Studies show people tend to be hungrier and eat more when they don’t sleep enough,” he says.

“My lumpy old mattress could be making me fat?”

Eight years has become Sit ’n Sleep’s anointed expiration date for mattress replacement. “We’ve kind of transitioned,” says Sacks. “We now have animated dust mites in some of the commercials because Larry is trying to kill them.” The health ads, spread across radio, TV, and the Internet, are part of an $18 million annual media budget. That’s serious money for what is forecast to be a $90 million business in 2010, but mattress retailers consider heavy advertising a necessary expense. Leeds Mattress, a smaller Southern California chain, has a substantial presence on television, with owner Neil Leeds standing in the middle of a showroom and promising “I won’t be beat.” Department stores and warehouse chains are big advertisers as well. “They advertise constantly because they never know who is going to wake up this morning and say to his wife, ‘You know, we really need to replace this mattress,’?” says Jerry Epperson, who follows the industry as managing director of the investment banking firm Mann, Armistead & Epperson.

Mattress retailers have never made shopping easy. They promise the best deal in town, but names and model numbers are often different from store to store, so comparison shopping becomes impossible. The trickery began with department stores, which used to command most of the mattress market and would sometimes enjoy price margins approaching 100 percent. That provided an opportunity for mattress stores like Sit ’n Sleep to offer lower prices and still make a nice profit. As with car dealers, the business can involve haggling, which, based on reviews from the Web site Yelp, leaves shoppers wondering how good a deal they really got. “Be very, very careful,” warns a posting about Sit ’n Sleep. “The sales people will do and tell you anything to move you up in price—way up!” Miller says he doesn’t play those games because they only alienate people. He insists that his prices are fair and that he’d like to see more transparency in the business so it’s easier to make store-to-store comparisons.

Miller opened the original Sit ’n Sleep in 1980—only a few blocks from the current Culver City location—with his father, Phil, after they failed with a convertible sofa franchise. They each put in $10,000 and sold daybeds, futons, and sofa beds. The early going was tough, with sales of $200,000 in the initial year. Miller pocketed $9,500 (his first wife was convinced that he wouldn’t make it on his own and pushed him to get an office job). Even then, advertising was considered a big deal, although the Millers could afford only small ads in the Herald Examiner and the L.A. Weekly, along with flyers that were hung on the doorknobs of houses and apartments.

The story could have easily ended there, except that Miller, who sports a gap-toothed smile and salt-and-pepper curls, always had a knack for falling into things. He began advertising on radio after he and his father were at a Dodgers game and happened to meet a KABC-AM sales rep named Tom Hogan. Miller spent $100 a night for four spots on The Ray Briem Show, and after getting a good response, he bought time during the day. But the station’s other announcers weren’t as convincing as Briem, so Miller decided to record the spots himself. “It was horrible. I got into the studio and froze,” he says. After three-and-a-half hours, Miller managed to cut a 60-second spot.

Slowly he got better. One afternoon he was in the store preparing scripts with Hogan when the phone rang. It was a pregnant woman who had been having trouble sleeping because of sciatica. Miller suggested a firm mattress with a soft top layer. “It was $399, on sale, I’ll never forget it,” he says. “She asked, ‘How do I know I’m getting the best price?’ And I said, ‘Ma’am, I’m the president of the company. I shop my competition every other week, and I’ll beat any other price or your mattress is free.’ The next day Tom called me and said, ‘Hey, that thing you said about beating anyone’s price or your mattress is free? Put that at the end of your ad.’
I said, ‘What thing? What did I say?’?”

It’s not much of a come-on—Miller has never given away a mattress, because all he needs to do is undercut the competition (assuming you find the same mattress specs at another store). But the message had snap, especially after Miller learned to emphasize the word freeee. The turning point came in 1992, when Rich Kagan, an ad salesman for The Howard Stern Show, began hounding Miller to buy time. “I probably went into that store 30 times,” says Kagan, who was being routinely turned down because Miller found Stern’s humor a bit much. One day Kagan’s car was broken into during an unsuccessful sales pitch, and Miller felt so sorry for Kagan that he decided to give it a try.

Soon after Stern became the Sit ’n Sleep pitchman, sales soared 50 percent, and Miller used the extra revenue to buy time on television. From there business doubled, many more stores were added, and Irwin came on the scene. No focus groups or consultants—the company grew mainly on the strength of its selection and the wacky ad campaigns (Irwin’s line was snatched from a recording session when Miller kept cracking people up by telling dirty jokes). Whether the new ads take hold is anyone’s guess. Retailing can be quirky and unpredictable, especially with an uneven economy that has kept many consumers on the sidelines. But having turned 60, Miller is beyond the point of some passing retail fancy. “It’s crazy, crazy,” he says, acting as if he has won the lottery. “Look, I came from nothing, and I’m appreciative and grateful. It goes to show that if you do something long enough, eventually you become a success.”